Iggles and I are going to have a hockey playoffs showdown.

Winner gets a case of beer.
If I win he buys me a case of Sam Adams Boston Lager.
If He wins I buy him a case of Yuengling.

No. 1 Boston Bruins vs. No. 8 Montreal Canadians

This is really a no brainer. Bruins in 5…..I just can’t see Montreal scoring enough goals in this series to make it competitive.

No. 2 Washington Capitals vs. No. 7 NY Rangers

O vie….Ovie….Ovie…..I was really hoping Carolina would fall to the 7th seed so I could pick an upset here but it is written in my Philly Handbook that under no circumstances can I pick the Rangers to win anything. Capitals in 6.

No. 3 New Jersey Devils vs. No. 6 Carolina Hurricane

The Devils have been just God awful these past few weeks….and on the opposite side Carolina has been red hot. Carolina in 5.

No. 4 Pittsburgh Penguins vs. No 5 Philadelphia Flyers

Ugggghhhhhh…….there are always 2 upsets per conference during the first round of the playoffs. Before yesterday I had Carolina upsetting the Devils and the Penguins (5 seed) upsetting the Flyers. But my Flyers had to go screw it up and lose on Sunday dropping them to the 5th seed which makes the Penguins the favorite. With that said…..I have absolutely no confidence in this pick but I’ll take the Flyers in 7.

No. 1 San Jose Sharks vs No. 8 Anaheim Mighty Ducks

The Ducks have turned it on since the trade deadline. They still don't have enough to win this series but they do have something left to make it interesting. Sharks in 6

No. 2 Detroit Red Wings vs No. 7 Columbus Blue Jackets

I really wanted to see the Blues play the Red Wings but i'll take this match up. I don't think Steve Mason can stop the Red wings offense and Rick Nash just isn't enough to beat whoever the Red Wings throw in net. Red Wings in 5.

No. 3 Vancouver Canucks vs No. 6 St. Louis Blues

I am not going to lie, I know nothing about Vancouver other than its fucking cold up there and Roberto Luongo is their goalie and captain(how can an Ace be both 1 and 11). Blues in 6.

No. 4 Chicago Black Hawks vs No. 5 Calgary Flames

Now this could be the best series in the west. The teams match up well. The only question for the Black Hawks is who is playing net? Calgary has lots of fire power. This series will go 7 with the home team moving on. Black Hawks in 7

Just for shits and giggles here are the ESPN experts picks: 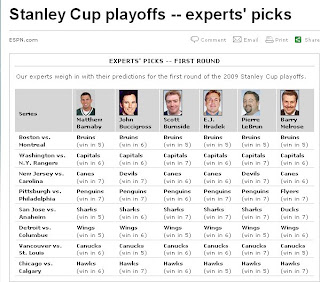 im on record as rooting for iggles to win........i know that kid cant drink a case!!

Everyone should be rooting for me. I don't really drink so that means free beer for everyone!