Don't Fuck With This Bitch 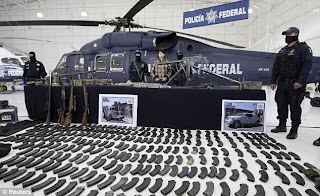 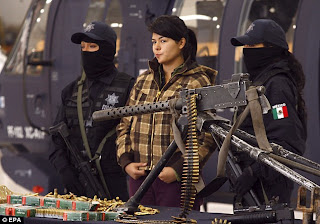 What's a nice girl like you doing with an arsenal like this? Police seize 20-year-old guarding vast weapons cache... including anti-aircraft gun
Smirking for the camera, this is the 20-year-old woman Mexican police caught guarding an extraordinary arsenal of weapons.
Anahi Beltran Cabrera was seized during a routine patrol in Sonora state, near the U.S. border.
Officers recovered a vast cache of weapons including an anti-aircraft gun capable of firing 800 shots per minute, a number of rifles and an array of ammunition.
The cache included an antiaircraft gun, numerous rifles and a large amount of ammunition
They believe the haul belongs to a group allegedly linked to the powerful Beltan Leyva drug cartel.
Cabrera was paraded before the media - along with the weapons she was caught guarding.
Large swathes of Mexico have been ravaged by violence with drugs gangs battling for territory.
Last month, 2,000 soldiers and armed federal police were deployed into the border town of Ciudad Juarez to restore order to the country's most violent city.
In one month, 250 people were killed by hitmen fighting for lucrative smuggling routes.

Someone needs to introduce Ryan Walsh to this chick a perfect match if i ever saw one. This girl had fucking anti aircraft guns..........
Posted by ChiefDude at Tuesday, April 14, 2009