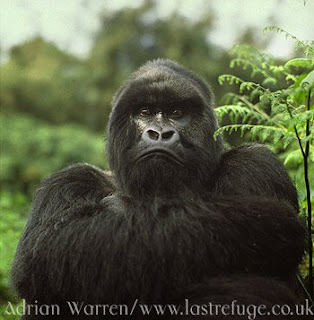 Not trying to get too serious here but I'm sure it doesn't surprise anyone that I'm a believer in Evolution over Creationism. My Atheist membership prohibits me from from believing in Creationism. Keeping it short and sweet...Evolution basically states that we evolved from apes and monkeys into the species we are now. I only saw one major problem with this theory...where does being bald fit into this whole concept? I mean when was the last time you saw a bald gorilla roaming the countryside? Right? Well....I seem to have found my answer tonight. Let me introduce you to the Uakari Monkey 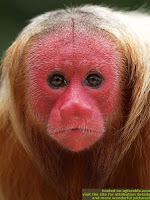 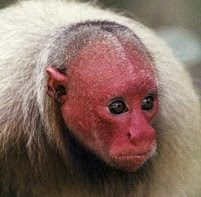 Let me make sure I have this right.  Short, bald, over-weight, dark beedy eyes, and a certain scowl on it's face that never seems to go away.  That's the Uakari Monkey?  Well, it looks like I've found which branch of the Evolutionary tree I fell from.  Thanks a lot Mr. Uakari!
Posted by Iggles at Monday, April 13, 2009

now that is some blog worthy type stuff!! great work!!