I made it, barely, another Opening day in the books. My day started out at noon and I ended up passed out by 9:00pm. 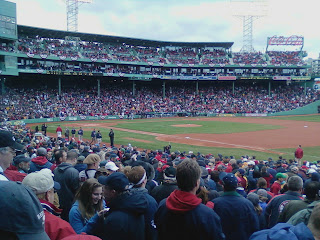 Some highlights of the day:
1. The Longhorn Steak house food sucks. Maybe they we having a bad day but man it was terrible.
2. The hook up at Tequila Rain was sickening, when you roll with Jackie Moon you roll like kings.
3. The fly over to end the opening day ceremonies was electric. I still have goose bumps.
4. The seats were dope as shit!(Does anyone say DOPE AS SHIT anymore?)
5. The players coming through the crowd was very WWE-ish, and I didn't like it one bit.
6. Josh Beckett looked to be in mid-season form, his shit was nasty.
7. Popeyes Chicken is totally underrated.
8. The Bruins looked sloppy and Manny Fernandez BLOWS!
9. Turning around to the smallish Indian man sitting behind me, giving him the thumbs up and shaking his hand for having the sweetest stache of the day, WAS PRICELESS!

Bigshow had a family emergency, Jeffrey is MIA, and I was bombed at the SOX so it's good to see a win for I HATE GARY.

jackie moon is a god!