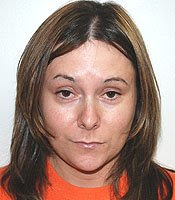 APRIL 16--The woman who filmed herself and a co-worker as they joked about contaminating food at a Domino's Pizza in North Carolina is a registered sex offender who last year pleaded guilty to engaging in an illicit act with a 14-year-old girl. Kristy Hammonds, 31, and Michael Setzer, 32, were arrested yesterday and charged with delivering prohibited foods after a video surfaced showing Setzer preparing sandwiches while putting cheese up his nose, passing gas on salami slices, and appearing to blow his nose on the food. While this was occurring, Hammonds filmed Setzer and provided commentary such as, "In about five minutes it'll be sent out on delivery where somebody will be eating these, yes, eating them, and little did they know that cheese was in his nose and that there was some lethal gas that ended up on their salami." She added, "Now that's how we roll at Domino's." Court records show that Hammonds, pictured in the mug shot at right, was charged in 2006 with three counts of statutory rape and pleaded guilty last June to a reduced count of misdemeanor sexual battery. According to a Superior Court indictment, a copy of which you'll find below, Hammonds (who was charged under her married name), sexually abused the teenage girl over a four-month period. Investigators with the Alexander County Sheriff's Office, which arrested Hammonds in the sex case, declined to provide further details about their probe, citing the need to protect the minor victim. As part of her plea deal, Hammonds was required to register as a sex offender and ordered "not to be alone with anyone 16 or under, with the exception of her own children." She was also placed on probation for two years, hit with a 60-day suspended jail sentence, and fined $1941.

Where to start with this shitshow? I am hungover as all hell from last nights game and someone send me this link. I can hardly let it just slide by without a post.

WHO THE FUCK STICKS CHEESE UP THEIR NOSE???? WHO!!! Why is this dude farting on salami? Was the stick of salami up his has 1st? Blowing his nose on the food? I mean, Jesus. People are going to be eating this and fucking paying for it. The whole things tapped. What kind of satisfaction did these two fucktards get out of all this bullshit? I haven't even addressed the kicker...sexually abusing a 14 year old girl? This dumb douche broad needs a hot poker stuck in her clammy box. She needs a good skull fucking.
Posted by d at Friday, April 17, 2009

thats fucking SICK ! i mean girls dont start turning me until they are atleast 15...

Sorry, I was hungover and angry! I apologize for my filthy potty mouth!

Oh, I am so angry about sexual abuse with children. That is reason why some sites like Vip Jasmin was born. I think people just need some dating online with others to reduce the problem of abuse. Hope this will be useful. Many thanks