I am a little slow today so please bare with me.

Lets see what I learned this weekend:
1. Lauren Brady is back from her west coast hiatus. She is single and ready to mingle fellas.
2. Brah, how about option 3 - I take this honey upstairs brah. Fucking Ozzie!
3. You can not show goats with a goatee, they must be fully shaved: 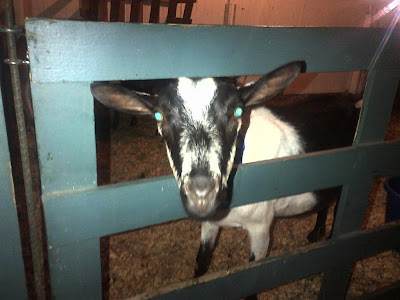 4.﻿ Watching grown men throw away chicken because it is too hot/spicy never gets old to me.
5. As always the Marshfield fair was a huge success. Chrissy finished 3rd in his heat: 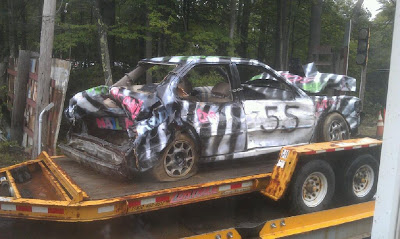 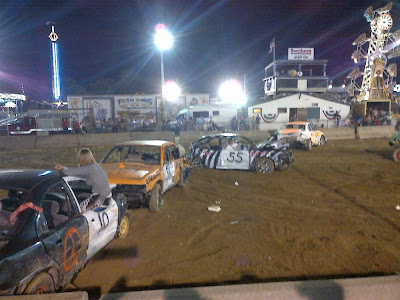 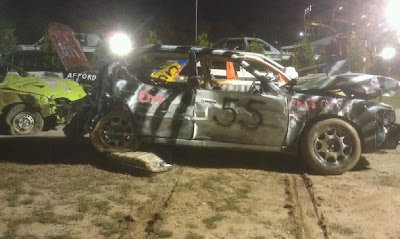 6.﻿ The Ming Dynasty is under new managment and their french fries and gravy blows. You are welcome.
7. How old is this thing: 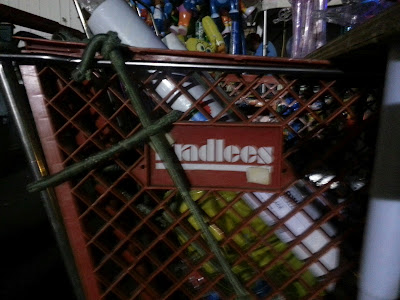 8.﻿ I heard Julie Nickerson is back around for a week. Has anyone heard from her?
9. My brain is filled with loads of useless TV information.
10. Honestly, how do you even play this: 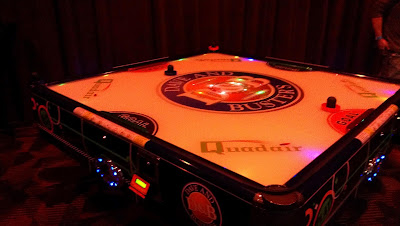 11. Katie is offering her baby sitting expertise to any and all.
12. You can not help anyone who does not want help.
13. I can never get used to the over night shifts.
14. Goats poop every 8 minutes. That is a lot of shit man.
15. I think Grillo and Chrissy are the new BFFs of the south shore. They will have their own reality show soon.
16. Jeffrey is on vacation this week. If you need anything he is ya man.

Have a nice week. See ya next week.

Feel free to vote for my nephew, Ryan: 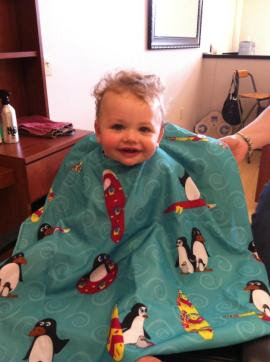 As everyone is aware the Marshfield fair is upon us again and that means it is time for Chrissy to be in the demolition derby.

His 1st heat is this Friday night so get after it. Here is what this years car looks like. 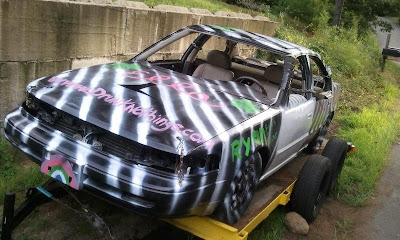 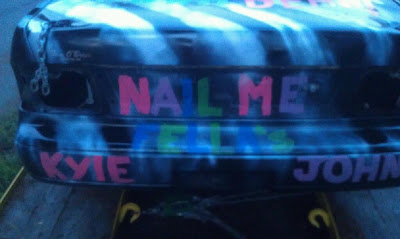 Back in the Saddle again

I am jumping right into it this week.

Here is what I learned this weekend:

1. The bacon cheddar tots at Stars in Hingham are the shit.
2. Speaking of bacon, Snyders has new bacon chaddar pretzels.
3. What does one get their 2 year old niece for her birthday? Any suggestions?
4. Rio is not up for a wood paneling reno job.
5. I have no clue how people work the overnight shift. I feel like every night worked I lose one year of my life.
6. Jeffrey gets so hung over he can't function the next day.
7. Shaun Larry is still MIA, I know wedding plannings a bitch but man!
8. Chrissy is looking to do a wing challenge in New Bedford if anyone is up for it.
9. Mikey T has 4 tickets for the Sox, Thursday August 23rd if anyone is interested.
10. Are people still debating if this Olympic team could beat the 1st Olympic basketball team?
11. Tiffany &Co are responsible for making the Super bowl trophy. Who knew?
12. I am so over shark week. It is a bunch of the same re-runs every year.
13. Today is national left handers day. Get out there ya weirdos.
14. One, when did No Doubt get back together and Two why does their new song sound exactly like their old shit?
15. Yes, Rio is going to Saratoga next week and No he is not meeting up with Mike G. You figure it out.
16. In 75% of American households, the women manage the money and pay the bills.
17. Astronauts can not cry in space. There is no gravity to pull the tears from the tear ducts.
18. July is the month where the amount of sex increases the most. Hey Fuck you August.

So we have our first Pre-Season game in the books. Here is my review of what I saw this is only my opinon as if i was great at it it would be my day job. 1. Offense Im pretty sure its still cliff diving in some south American Country WTF? On a positive not undrfated Davis WR looks promising but might have a pretty good injury coming in the fourth quater. Ryan Mallet has a gun of an arm but im pretty sure he was high the entire game as him and the recivers are completly on the wrong page. 2. Defense I like what I saw it was promising , and no I will not make any predictions about this season with yards, and points allowed. What was good to see is Jones DE #95 was on the field for 14 plays and was consistantly in the backfield, and drew two offensive penalties against a pro bowler not a bad start. Hightower LB #45 can hit like a mofo, and has good side to side coverage skills can close fast but needs to wrap up tackels. Safety position looks solid.
Posted by ChiefDude at Friday, August 10, 2012 3 comments:

From Yahoo - Rio sent this to me today and I thought. Lets fucking do this.


Myths about alcohol are as abundant as the substance itself, with widely touted rumors on everything from ways to instantly sober up, craftily beat a Breathalyzer test or magically cure a hangover. It can be hard to separate fact from fiction.


While alcohol companies churn out often ads promising rebellion, excitement and sex appeal with your next swig, urban legends circulate on the other extreme, linking alcohol with everything from brain cell damage to beer bellies—even when liquor isn’t the culprit.

1. Myth: Taking an aspirin before drinking will prevent a hangover.

Fact: In reality, the opposite is true. Research shows that aspirin actually increases the amount of alcohol that ends up in your system, which makes you get drunk quicker—and stay drunk longer. In addition, mixing aspirin and booze can lead to gastrointestinal bleeding

Drinking after taking acetaminophen, found in Tylenol, can be even worse and may even lead to liver damage—so it’s best to heed the warning labels on the bottles for over-the-counter medications for this one!

2. Myth: Sucking on pennies will trick a Breathalyzer due to the copper in the coins.

Fact: People who wish to put themselves and others in harm’s way by driving drunk should know that stuffing a handful of coins in their mouths once they get pulled over will not help them evade responsibility.

The theory is that copper from a penny will absorb ethanol. But even if that were the case, pennies these days have very little copper these days—only 2.5% since 1982, according to the U.S. Mint. And even if you found a stash of old coins, or a magical substance that absorbs alcohol, it still won’t do the trick.

Police officers actually wait fifteen minutes before they have you take the Breathalyzer test, and they’ll also check your mouth to make sure nothing could throw off the results. And the test measures air deep within your lungs—so even if any of these tricks actually had an effect on the air in your mouth, they still wouldn’t trick the Breathalyzer.

3. Myth: Drinking too much will give you a beer belly.

Fact: This much is true—drinking beer excessively can certainly lead to weight gain. But the extra pounds won’t necessarily gravitate towards your belt line, according to a 2009 study published in the European Journal of Clinical Nutrition. Although beer consumption did lead to increased waists circumference—which was closely related to overall weight gain—including bigger hips as well as a wider waistline. And a 2003 study indicated that a big gut has a lot to do with genetics, which can dictate where those extra pounds end up.

4. Myth: Men and women who are the same height can drink the same amount—and get the same results.

Fact: Women actually process alcohol much differently than men—even when controlling for size. Men are generally leaner than women, but both genders have roughly the same size liver. This means that women clear more alcohol per unit of lean body mass than men do, releasing it into the bloodstream quicker.

More alcohol in the blood means women get drunk faster, and it also leads to another problem. Women have way less of the enzymes that break down alcohol in their blood, making it nearly impossible to go shot for shot with even their smallest male drinking buddy without getting far more wasted.

5. Myth: Coffee will sober you up if you’re drunk.

Fact: Animal research suggests that caffeine might make you more alert, but this alertness doesn’t make your drunken state instantly vanish. A simulated drinking and driving study showed that while caffeine did slightly improve reaction time in addition to increasing alertness, it didn’t completely counteract the effects of alcohol impairment in these caffeinated drunk drivers.

Bottom line, the only thing that can sober you up is time.

Fact: Surprisingly enough, the opposite is true. Alcohol, in moderation, seems to have some positive health effects. And alcohol can actually create positive effects on the brain.

In fact, a 2005 study of 11,000 older women showed that alcohol can actually improve brain function and lower the risk of mental decline by up to 20 percent. Women who downed one drink a day scored as about 18 months “younger,” on average, on tests of mental skills than the non-drinkers.

However, the key is moderation: one drink a day for women and two for men and has a number of health benefits. Heavy drinking boosts the threat of liver damage, some cancers, and heart problems.

7. Myth: The best remedy for a hangover is having another drink in the morning.

Fact: The hair of the dog that bit you is one of the most pervasive drinking myths. Although having a drink in the morning after a night of partying might delay the symptoms of a hangover, once your blood alcohol content is back down to normal, your symptoms will return—possibly worse, due to the additional alcohol.

Water and time are the only legitimate hangover cures. Water will alleviate dehydration and time will ameliorates the symptoms. Additional alcohol won’t do either. To make things worse, the pattern of drinking in the AM can actually lead to alcohol dependency.

This is what I learned this weekend:
1. Jackie Moon only rolls with $100 bills!
2. Mikey T is a philanthropist (real reference).
3. Why is we are rolling with gift cards up the ass in the Fenway area but we go to the ABG?
4. Red Sox Nation may be dead but I picked up these seats for $50 a piece. I ain't mad atcha! 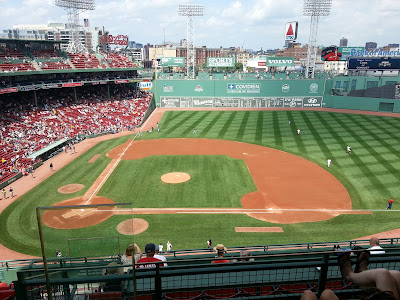 ﻿5. Rio is looking on the North Shore for a house. Can anyone recommend a town? He is thinking Wakefield after his favorite Sox player.
6. The Seadog has some good burgers and their jalapenos are legit. Their brew ain't half bad either.
7. My neighborhood had a block party on Saturday night. I was a party pooper and didn't go because I was a cranky bitch from working all day.
8. A 2 beer an inning pace is a bit fast but the hot weather makes ya thirstier.
9. Please tell the beer vendor that he does not need to lie - NO ONE IS DRINKING HEINEKEN.
10. The Twins fans travel better than I thought they would.
11. YES, how can I not get uncle of the year - passed out baby at a bar? 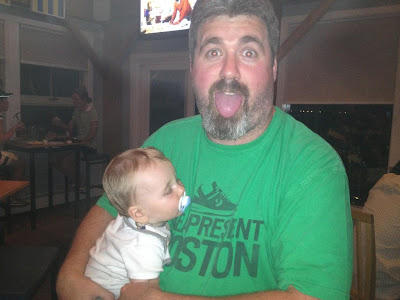 12.﻿ Katie chopped off all her hair again. I guess this heat wave gets to everyone.
13. Gilly has perfect hearing except in the human voice decible range. UHM WHAT!?
14. Chrissy is looking for some jet skis or a small boat for the pond near him. Keep your eyes open for him.
15. Who whores their daughter out for Bruins tickets?
16. I found Willie, he is scheduled for hand surgery. I guess thats what he is blaming on his Dotday bowl off loss.
17. They were scalping Monster seats yesterday. I have NEVER seen/heard of that in all my years.
18. The Barking Crab isnt a bad out door drinking spot.
19. Rumor has it Smiddy had rotator surgery.
20. Mitchell almost got lost out at sea.