MILFORD CENTER, Ohio—A woman was given three OVI in less than a week, and, oddly, officials said she wasn’t drinking alcohol.

NBC 4 reported the story with information from the Marysville Journal Tribune.

The only problem, Marysville Municipal Court officials said, was that she was not drinking alcohol.

Each time she blew into the breath machine, the result was a zero reading.

According to the Union County sheriff’s office, Webb, of 20 Greenfield Dr., was arrested for operating a vehicle intoxicated (OVI) Monday, April 6, after she raised suspicions while stopping to ask for directions at Honda of America.

The man she asked happened to be a Union County sheriff’s reserve officer.

“He thought she was disorientated,“ Skinner said.

The officer called for deputies to stop her vehicle, and she was determined to be drunk after a field sobriety test.

It was then discovered that Webb was arrested twice the previous week for OVI.

Webb was arrested by sheriff’s deputies after she was observed driving outside of marked lanes and weaving her car while heading down Amrine Wood Road at 5:02 p.m. Wednesday, April 1.

She was then arrested again for OVI after a traffic stop by Marysville police on Milford Avenue at South Maple Street at 8:04 p.m. Thursday, April 2.

He said laboratory test results are still pending to determine why Webb appeared intoxicated and what, if any, drugs she might have been ingesting.

Attorney Victoria Stone-Moledor said Webb has an extensive criminal history, mostly involving prior felony convictions. She said her file is so “voluminous” she has not had time to read the whole thing yet.

During the arraignment on Monday, Stone-Moledor said, Webb still appeared to be disorientated.

“I really don’t think she understood what was going on,“ she said.

Because of a loophole, she said, Webb has been able to keep driving.

The same loophole has determined each of her OVI arrests to be first-degree misdemeanors instead of felonies, because none of the arrests has had time to lead to a conviction.

Stone-Moledor said that she requested the standard $10,000 bond, but the judge set it for $150,000 instead after seeing Webb’s condition in the courtroom.

Because Webb has not been convicted, Stone-Moledor said, her license had not been suspended.

However, she said the judge decided to suspend her driver’s license Monday because she “is determined to be a danger to society.“

Webb agreed to have her car impounded while she waits in the Tri-County Regional Jail in Mechanicsburg for her next court date.

Story courtesy of Ryan Horns with the Marysville Journal Tribune. 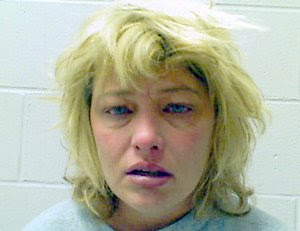 Ok, so first off this lady appeares to be bombed yet when she takes a breathalyzer she is totally NOT? I need to know what kind of drunk pills she is taking. Are the prescription? Over the counter? Where does one get them? Secondly, I wish there was a video of this broad getting arrested. Lastly, How does she get to keep on driving? What kind of state is Ohio where you get an operating under the influence charge but can effing drive home? People, Ohio may be a safe haven for drunks!! This state could have an untapped potential for all the boozebags, drunks, and even the alkeys of the world.
Posted by d at Sunday, April 12, 2009