Bruce Willis wed his girlfriend, model Emma Heming, Saturday at his home on Parrot Cay, on the Turks and Caicos islands in the Caribbean. His rep tells Us Willis' daughters, Rumor, 20, Scout, 17, and Tallulah Belle, 14, and their mother, Willis' ex Demi Moore, were present, as was Moore's current husband, Ashton Kutcher. A source tells Us that Madonna was also among the guests. "The couple will be having a civil ceremony when they return to California," Willis' rep tells Us.
This is the second marriage for Willis, 54, and the first marriage for Heming, 30.
Rumors of a wedding surfaced earlier this week: Rooms and private villas had been reserved for his guests at a hotel near his home there.
Willis and Heming have been dating since last year.
Willis was previously married to Moore. They split in 2000 after 13 years of marriage but have remained friends. He even has referred to Moore and Kutcher as his "extended family." 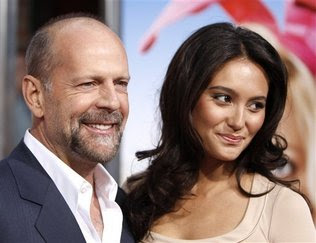 British reality star Jade Goody died in her sleep early Sunday after a seven-month battle with cervical cancer. She was 27.Surrounded by her family at her home in Essex, southeast England, she passed away at 3:14 a.m., her publicist, Max Clifford tells Usmagazine.com.
"She had been asleep the past 24 hours and it happened very peacefully," he told Us. "Everyone is, of course, devastated, but we knew this was coming. I'm just glad people are remembering her as a brave girl who took on this battle with courage and gusto. She's inspired a lot of people." Her mother Jackiey Budden, who was at her side as she died, told BBC News, "My beautiful daughter is at peace."
Added British Prime Minister Gordon Brown, "She will be remembered fondly by all who knew her and her family can be extremely proud of the work she has done to raise awareness of cervical cancer, which will benefit thousands of women across the UK."
Goody was a dental assistant who rose to fame as a loud and brash contestant on the reality show Big Brother in 2002. She was often ridiculed by fans for her lack of education (she thought Saddam Hussein was a boxer). She stirred controversy on a follow-up show in 2007 when she referred to another contestant, Bollywood actress Shilpa Shetty, as "Shilpa Poppadom." She also complained about Shetty's cooking of Indian food and mocked her accent. Goody's treatment of Shetty sparked a debate during a House of Commons question-and-answer session with former Prime Minister Tony Blair. To show she was sorry, Goody went on to star in an Indian version of Big Brother. ("The people of India have only seen a small part of me and I'd like to show them that there is more to me," she said at the time.)
While filming the show last summer, she was diagnosed with cervical cancer.
In February -- as the cancer spread to her liver, bowel and groin -- she married fiancee Jack Tweed at a countryside hotel outside London. Her mother, Jackiey Budden, was by her side. (The wedding was televised and photos were sold to a magazine.) "It was a beautiful day and I'm just so proud of her," Budden told Usmagazine.com of the Feb. 22 ceremony. "She didn't wear a wig - we thought she would, but she said, 'Mum - I'd feel weird with hair now. I don't have hair now - why fake it?' "I'm just so proud of Jade for being so incredibly strong. I love her so much and am proud to be her mother," said Budden. "This was a happy occasion, and I want everyone to know that."
Before her passing, Goody was also baptized in the hospital with her sons Bobby, 5, and Freddy, 4. Goody -- who filmed the last moments of her life for Britain's Living TV -- returned to her home March 11 to be surrounded by "all those who are close to her" before she passed, her publicist Max Clifford said.
Funeral services for Goody will take place in Upshire, Essex at the churchyard of St. John the Baptist, in Buckhurts Hill.
"It will be a celebration of her life... a final farewell," Clifford told Us. "Jade's planned everything. It's exactly the way she wants it and completely in her style."

Where in the world was Matt Lauer on the Today show Monday morning?At home, resting.
Lauer, 51, was slightly injured after he flipped over his bike's handlebars this weekend when a deer jumped into his path.
Posted by stylegal at Monday, March 23, 2009

Hey Matt Lauer...get over yourself

NO PICS?? i need to see bruce willis' new wife