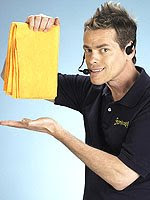 MARCH 27--Meet Vince Shlomi. He's probably better known to you as the ShamWow Guy, the ubiquitous television pitchman who has been phenomenally successful peddling absorbent towels and food choppers. Shlomi, 44, was arrested last month on a felony battery charge following a violent confrontation with a prostitute in his South Beach hotel room. According to an arrest affidavit, Shlomi met Sasha Harris, 26, at a Miami Beach nightclub on February 7 and subsequently retired with her to his $750 room at the lavish Setai hotel. Shlomi told cops he paid Harris about $1000 in cash after she "propositioned him for straight sex." Shlomi said that when he kissed Harris, she suddenly "bit his tongue and would not let go." Shlomi then punched Harris several times until she released his tongue. The affidavit notes that during the 4 AM fight Harris sustained facial fractures and lacerations all over her face. After freeing his tongue, a bleeding Shlomi ran to the Setai lobby, where security summoned cops. Harris refused to cooperate with officers, who recovered $930 from her purse. "Both parties had a strong odor of an alcoholic beverage emitting from their persons," police reported. In a brief telephone interview, Harris declined to answer TSG questions about her run-in with Shlomi, though she did say she is considering a lawsuit against the pitchman. Asked if she worked as a hooker, Harris declined comment. As seen in the below mug shot, Shlomi was also injured during the fracas and, court records show, was treated at Mount Sinai Medical Center. While Shlomi and Harris were both arrested for felony aggravated battery, prosecutors this month declined to file formal charges against the combatants. Police records list Shlomi's occupation as "Marketing," but make no mention of his affiliation with the ShamWow or the Slap Chop, both of which sell for $19.95 (plus shipping and handling).
He looks fucked up: 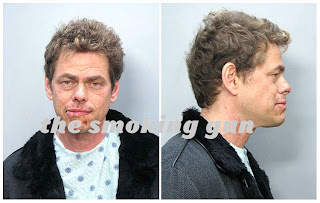 She doesn't look too bad: 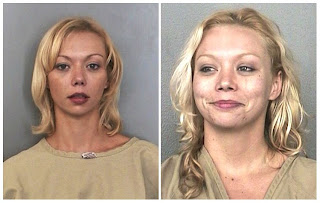 Thanks to the Smoking Gun

This story is great. Who would of thought the guy who does the Shamwow commercials has to pay for sex? Whats up with the prostitute biting his tongue? Why is he sucking face with her? If you are paying for sex - it is wham, bam, thank you ma'am and don't let the door hit you in the twat! As far as hookers/prostitutes/whores go she ain't half bad; kinda girl next doorish but she doesn't knock your socks off! I would give her a 6!
Posted by d at Saturday, March 28, 2009

Uhmmm....is there a hooker hotness rating scale? Like u see a girl in a bar and she's a 7. But once you find out she is a hooker she becomes a 9 on the hooker hotness scale?

wouldnt it go down; bar 7 hooker 4? i mean you are literally PAYING for that.