People Who Live in Glass Houses.... 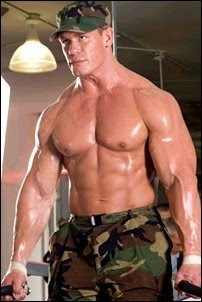 “(Rodriguez) got defensive, saying he used because he felt he needed to,” the wrestler and star of the film “12 Rounds” told the New York Daily News . “But if there was a set of (legal) stipulations in place he may never have even considered it.

“The government should take the initiative, and if you get caught using drugs, then you should go to jail,” Cena continued. “A criminal record will hurt your endorsements and long-term contracts.”

Like my friend Derek's dad used to tell him "be careful what you wish for son". I did bump into Cena in the airport a few years back and all I am gonna say is the guys a freaking monster and not to burst your bubble but "you don't look to be 100% natural yourself there pal. So be careful John, this could come back to bite ya in the A$$ someday. So A-Roid, if ya want some come get some...
Posted by RIO at Thursday, March 26, 2009

No thats all natural dude! LOOKS GREAT BY THE WAY