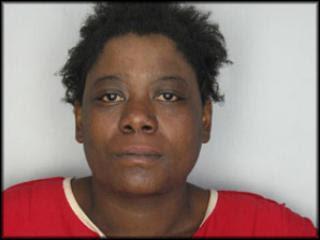 Tampa, Florida - Francina Walker was arrested at Dale Mabry Blvd. and Interbay after she waved down an officer, exposed her breast, and offered to commit a sex act for $20.

After being placed inside a police cruiser, she kicked out the rear passenger door window.

Walker is being held at Hillsborough County Jail.

Lets be honest. Did anyone actually think that picture was a woman? Better yet a woman who people would pay to have sex with? $20 bucks for a Blow job?? What the hell was she on to actually seek out a cop, show him her titty and then offer to suck him off? I know times are tough but doesn't a BJ go for more than $20?? I got no beef with her hiding a knife in her purse but the screw driver in her bra scares me. She could be giving you the $20 dollar treatment and stick that screw driver right next to your nutsack and demand another $20!! Bitch wanted some, Bitch got some.
Posted by d at Friday, March 20, 2009