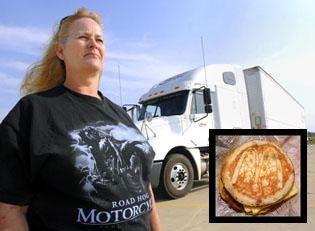 SEIKSTON, Mo. – After embarking upon an expedition that began via oral entry into a human esophagus, an area McGriddle breakfast sandwich has finally completed its long, onerous voyage through local woman Randy Messner’s gastrointestinal tract.

Having now passed through Messner’s rectum in a mostly in-tact state, the courageous McGriddle spent 15 days battling harrowing conditions which threatened to break down the sandwich by separating its few nutrients from its mostly processed fats and by systematically attacking the delightful McDonald’s breakfast meal with acids.

Showing the heart of a hero sandwich and the fortitude of igneous rock, the McGriddle, leaning heavily on its ample supply of preservatives and copious other ingredients not found in nature, survived the multiple trials of Messner’s digestive process.

Passed by 26 meals on its way to the rectum, the sausage, egg, and cheese McGriddle — unaffected by the attempts of Messner’s liver to break down the breakfast sandwich with bile — spent eight days in Messner’s small intestine before moving on to the large intestine.

While the large intestine typically finishes the digestion process in 10-12 hours, Messner approximates the syrup-infused hotcake sandwich spent four to five days there due to the concentration of waste material within the corporate-logo-embossed breakfast treat.

“I could tell [the McGriddle] was a fighter,” said Messner, a 46-year-old over-the-road trucker, who recalled previous McGriddles lasting a mere 8-10 days before succumbing to partial digestion. “I thought this one was different when I took my first bite, and subsequently one week later when I could still feel the throbbing in my gut.”

The McGriddle eventually emerged into the final straightaway of the large intestine, filling the rectum to capacity after most likely expanding the colon to accommodate its maple-syrupy girth during its days-long voyage through final stage of the alimentary canal.

Messner, who added that a flood of McCafe coffee was unable to jar the McGriddle loose or otherwise aid the digestive process, said in the future she plans to eat only the bacon, egg and cheese McGriddle variety, which she believes to be slightly organic.

-Thanks to the Giant Napkin

After reading this I will NOT be eating the Mcgriddle or anything else from McDonalds anytime soon. I mean come on 15 fucking days to shit this out? I like to thing I am quite "regular", frequently sitting on the throne and defecating (ha what a funny fucking word). There is no way on gods green earth that anything is sitting inside me for 15 days. By anything I mean a Mcgriddle, a bowling ball, a lbs of cheese, 17 bananas, or any fuckingthing else!

Here's your chance to score tickets to every sold out Celtics home Playoff Game! Be at the Garden to catch all the post-season action live as the C's try to capture Banner 18. Paul Pierce, Kevin Garnett, Ray Allen and the rest of the Celtics are sure to make history this spring against the most elite teams in the NBA.

Enter today for your chance to win two (2) balcony tickets to each Celtics home game of the 2009 postseason. Limit of one entry per person.

i love everything the the McDonald's McCafe coffees, everything except the silly name