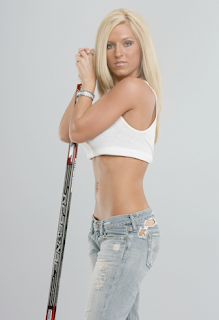 This weeks Ice Girl feature focuses on the Tampa Lightning Ice Girls.  Good pictures and good video all rolled into one....I just wanted thank the Ice Girls for being so photogenic.  I'll be honest I can't say I'd pay to watch the Lightning play but I would definently pay to go watch their Ice Girls. FANTASTIC! The game highlights came out OK.....lots of Flyers highlights this week especially Marty Biron.  Looks like my boy Nitty will be riding the pine again for the playoffs.  Speaking of the Flyers they are the Game of the Week again this Sunday.  I'm not going to complain because it gives me a chance to watch my team, but the NHL really needs to rethink who they showcase on Sundays.  It's always the same 5 teams in some variation of order:  Flyers, Bruins, Penguins, Capitals, Rangers.  Come on guys there are more than 5 teams....try and adjust the schedule so that when the west coast teams are doing the east coast swing you can showcase them.  San Jose at Boston would have been a great game to see on a Sunday afternoon.  Hockey is a great sport to watch (especially live or in HD) but you have to involve everyone.  I can only watch Ovechkin vs Crosby so many times.
Anyway, boys and girls we are winding down to the end of the season so it's time to get ready for the playoffs.  I said it last week and I'm going to say it this week.  Beware of Mr. Brodeur!  He is 6-1 since his return and he's only given up more than 2 goals in one of those games.  That is how you win in the playoffs!  Both the Flyers and Bruins are playing .500 hockey right now so it's time to step it up.  And for the love of God do not let the Devils get the number 1 seed in the conference.