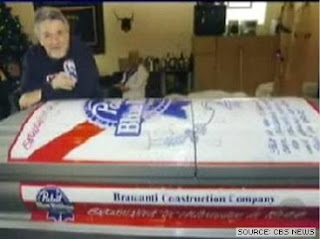 Glenwood village administrator Bill Bramanti had his coffin specially made to look like a can of Pabst Blue Ribbon beer.


Glenwood village administrator Bill Bramanti had his coffin specially made to look like a can of Pabst Blue Ribbon beer.

CBS News
1 of 1
Bill Bramanti will love Pabst Blue Ribbon eternally, and he's got the custom-made beer-can casket to prove it.

"I actually fit, because I got in here," said Bramanti of South Chicago Heights.

The 67-year-old Glenwood village administrator doesn't plan on needing it anytime soon, though.

He threw a party Saturday for friends and filled his silver coffin -- designed in Pabst's colors of red, white and blue -- with ice and his favorite brew.

"Why put such a great novelty piece up on a shelf in storage when you could use it only the way Bill Bramanti would use it?" said Bramanti's daughter, Cathy Bramanti, 42.

This guy is awesome. Not only did he order a casket that is designed like his favorite beer but he threw a party to show it off!! This story is a few months old and I just stumbled upon it but I think it is a novel idea. There has to be a market for this.
Posted by d at Friday, March 13, 2009