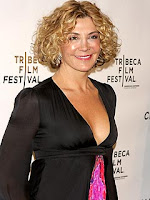 But Richardson – whose family announced her death Wednesday after a ski accident that resulted in severe brain trauma – was far from an also-ran: the smoky-voiced actress carved an impressive niche on stage with her Tony-winning turn as the vampy Sally Bowles in Cabaret and in films as varied as Gothic and The Parent Trap. Off screen, Richardson, who was 45, relished her role as Manhattan hostess – and doting mother to her two sons.


Beginner's Slope
Richardson was vacationing in Canada Monday when injuries sustained from what at first appeared to be a minor fall on the beginner's slope at Quebec's Mont Tremblant soon turned serious. She was evacuated to a hospital in Montréal and joined there by her husband, who had been filming in Toronto. Richardson was then flown to New York, where members of her family, including her mother and sister, Nip/Tuck star Joely Richardson, gathered at her bedside.

Following the announcement Wednesday night of the "tragic death of their beloved Natasha," the family group, led by a despondent yet dignified Neeson, left the hospital for the couple's home on Manhattan's Upper West Side. Neeson made a point of acknowledging the crowd on the street outside the high-rise building before disappearing inside.

A member of Britain's greatest surviving theatrical dynasty, Natasha, whose grandfather was actor Sir Michael Redgrave, made her film debut in 1968 at the age of four, playing opposite her mother in The Charge of the Light Brigade. A family affair, the film was directed by her father, Tony Richardson, although by then her parent's marriage had already ended.

Yet it was on the stage that Richardson made her mark first. After training at London's Central School of Speech and Drama, she was cast in a production of The Seagull and won the London Theater Critics Award for Most Promising Newcomer in 1986. She earned a Tony nomination for her New York stage debut in Anna Christie – where she first encountered co-star and future husband Liam Neeson – and picked up a Tony Award in 1998 for Cabaret.


A Top Chef
Praised for her delicate beauty and impeccable American accent, Richardson's first on-screen role came in 1987's Gothic. After marrying Neeson in 1994, she teamed up with him again that year in Nell. She co-starred with Dennis Quaid in the 1998 remake of The Parent Trap and had a memorable turn as a socialite in 2002's Maid in Manhattan. Richardson also earned critical praise for her lead role in Merchant Ivory's final film, The White Countess, and in 2007, she appeared in Evening, playing daughter to her real-life mother.

Neeson, now 56, once said of marriage, "I never believed I could do it, ever." Yet with Richardson, he had two sons, Micheal, 13, and Daniel, 12, and shared a farmhouse in Millbrook, N.Y. "Some actors when you work with them and they have children, you're surprised to find out they have children. With Natasha, she was fierce about those kids. Motherhood was really, really important to her," says Scott Ellis, who directed Richardson and her mother in a performance of A Little Night Music at New York City's Roundabout Theater in January.

Richardson was also an accomplished cook who she recently appeared as a guest judge on Top Chef and made family time a priority, despite a career that thrust her in the spotlight. As Neeson told PEOPLE in 2004, "Sitting down to eat in our house, talking about the day, is very important."
Posted by stylegal at Thursday, March 19, 2009

It's very easy too find out any topic on web as compared to books, as I found this post at this site.


My homepage - Have A Peek At This Site