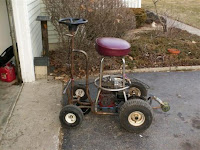 NEWARK, Ohio—Authorities in Ohio say a man has been charged with drunken driving after crashing his motorized bar stool. Police in Newark, 30 miles east of Columbus, say when they responded to a report of a crash with injuries on March 4, they found a man who had wrecked a bar stool powered by a deconstructed lawn mower.

Twenty-eight-year Kile Wygle was hospitalized for minor injuries. Police say he was charged with operating a vehicle while intoxicated after he told an officer at the hospital that he had consumed 15 beers. Wygle told police his motorized bar stool can go up to 38 mph.

Wygle has pleaded not guilty and has requested a jury trial
Posted by stylegal at Tuesday, March 31, 2009

I listed this in the links below #6!