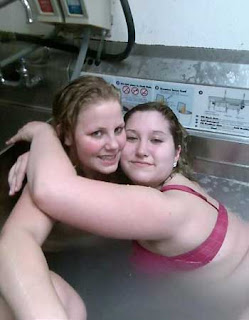 ANDERSON, Calif. — Three employees of a Kentucky Fried Chicken have been suspended for bathing in a deep sink used to clean dishes.

The prank was discovered after one of the young women posted photos on a social networking site of the trio posing and cavorting in the steaming water in their underwear and swimwear.
The photos were filed in a gallery called "KFC moments." Captions included "haha KFC showers!" and "haha we turned on the jets."

A manager of the fast-food restaurant said the three were reprimanded and suspended Tuesday.

She said no manager was on duty when the photos were taken as the three had closed the restaurant for the night.

times being tough is THE ONLY reason i put in my application to work at kfc!! dont judge me

what the fuck kind of dishes are they washing in that sink? those are two BIG BITCHES !!!!

I would work there for Free. Who doesn't like BBW'S?

I think this smidgy thing is catching on.