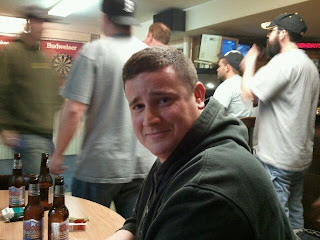 Tonight we played at St. Marks Post, always a great time, cheep beers and smoking butts inside, it also was the last time Kevin Barry  will be present as he is relocating to Tampa so this made the night even more festive, but he is buying a convertible so it is all good.
Foley showed up “emotionally tired” and it showed by the wrinkles in his clothes, it also came out that he is scared of, and hates cats, literally jumped out of his shoes when the bar cat creeped up on him, Derek is a big fan of the celebratory dart reviews, P showed up with a note book and a pen and passed them along to me.

I tried to keep up but when we get together it is hard to pick out the highlights of the night as they were a plenty. In conversations about smoking a “Jeffray” (Get him to the Greek) it came out that Shawn Larry has never seen “Hangover”, get it together man! P’s beard is coming in great and it should top last year’s stache. As always, St. Mark’s Post made some food, this week it was Clam Chowder which Welchie said was great, but ever the contrarian Foley felt it was a bit thin. Brighty is really into this pizza thing, going to start locally then market it nation wide, “its game time bitch”!

Apparently P has a case of “Jungle Fever” which caught more than a few of us off guard and led to at least one awkward moment. All in all, it was a great night, now onto the match reviews:

501’s
• Welchie and P lost the 1st 501 after P doubled in with 85 points; Welch couldn’t get away from the breakfast spread.

• Foley and Jeffrey took care of business in the 3rd 501 with a solid with, Foley doubled out on an 18

Cricket:
• Kev and Jeb got down big in the first Cricket but stayed in there and caught them sleeping, came back to take it in the end with the best comeback of the year so far!

• Sean Larry and Jeffrey lost the 2nd match to a “Ginger” and a pregnant lady, you guys are usually better than this, but it happens to everyone.

• Foley and Brighty took down the final Cricket match in what was the highest points totals we have sent his year…199-172, Brighty loves to point!

301’s:
• DWit lost the first match, it seemed like it was going to be more of the same for our beloved captain but he surprised us all by coming back and winning the 2nd and the 3rd marathon match getting out on a D 4.

• Welchie took down the first match but couldn’t keep the momentum going as he lost the next 2, not the best night for Welchie but he will see better days.

• Kev Barry, in what was his last match as a Repeat Offender lost 2 straight, apparently they don’t have darts in Tampa so he was not too upset…

• Brighty comes up and we need a win as it was starting to get close, as usual he came through with a commanding win, took down the first 2 matches on a D 8 and a D 16

So we ended the night with a 7-5 win but there were some matches left out there that we should have taken down. It is still early and we are reeling with the news we will be losing KevIN Barry, but as a team we will re-group and make sure to step it up in the 2nd half! Come on out and have a few drinks, next week we are playing at Peggys...hope to see you there! 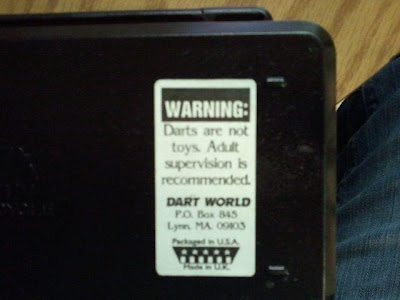 The dude in the picture looks like he is taking a shit!

great job. with the exception of welch's shit job i enjoy the dart reviews