I guess the experiment of delegating the weekly dart review was a bust so by popular demand, I am back. I hope I can raise the blogging bar but it will be tough to beat a post like, "We lost, Fuck Foley. Print it"!

We started the week in 1st place and faced the team from Ups and Downs, which included another one of KB’s girlfriends, my brother from another mother, last season’s famous chair thrower from the Banshee, and the king of the mullets. Jeffrey was a no show (what else is new) and Derek picked the B's over the DTF'ers which reminded me of a scene from Stripes. 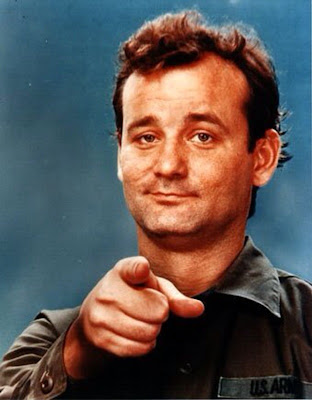 A dart team without it's leader is like a foot without a big toe...Captain Derek is not always gonna be here to be that big toe for us. ---Well Mr. Whitley, You just made the list, buddy. Thanks to Jeb for stepping up and being the Big Toe.

It was tough to keep track of everything because half of their team showed up late so we bounced from game to game but I tried to take a few notes on each match. The trouble is that I can’t read my drunken chicken scratch when I’m sober, so anyway let's get to the action:

501’s = 2 wins and 1 loss
Brighty and Shawn Larry got up early in their match. They maintained a comfortable lead most of the way until the other team threw a Ton-40 at them. Bright made a good bid at the close and set the table for his partner. Shawn wasted no time taking out a Double 16 for the win.

Jeb and I struggled to get in and quickly found ourselves in a 200+ point hole. We battled back to a single digit deficit but they beat us to the finish line.

Welchie and Supa P jumped up early and never looked back. MW closed out the game with a Double 4 for the win.

Cricket = 2 wins and 1 loss
Supa P and I played a tough team but P was key in this victory. He got us off to a great start and I picked up my game in the middle and the end for the win.

Jeb and Shawn - It was not pretty so I’ll holdback the commentary and just say they got smoked. Loss

Bright and Welch played the best game of the night. Welch was on fire and this one was never even close despite their opponents throwing their second Round of Nine of the night. Welchies last dart was a double cork and Bright took the glory of hitting the 3rd cork for the win.

Singles = 2 wins and 4 losses
Supa P lost to a woman in a 3 game set. Feel free to add your own comment here! The games were close but he had a tough time getting in and out. And did I mention he lost to a woman? I thought only CBV did that.

Shawn Larry also lost in a three game match. He was down big early in each match but kept battling. He came back from 130 points in game 2 to win and came up just short after being down 200+ in game 3.

Welch beat the chair thrower in 2 games. The first game was a seesaw battle and both players were within 10 points of each other from start to finish. Mark took care of business in game 2 for the win.

Jeb played the mullet and looked great early. He started out with a Ton-34 followed by a 76 and somehow found a way to lose the game. He was a victim of bad luck with untimely darts bouncing out of the board and went down in 2 games.

Bright flew out to a 200 point lead in game 1 and never looked back. Game 2 was looking like a repeat but the opponent came back from 130 down and stole the game. The 3rd game was neck and neck the whole way. The DJ came up just short for another loss.

I had the pleasure of playing the last match of the night. It was either go home with a 7-5 loss or get it back to a 6-6 tie. I played KB’s girl and took her down in 2 straight.


Things seen and heard around the bar...
Edso is back from Florida driving Welchie crazy.
Who the F*CK still uses a pay phone??? 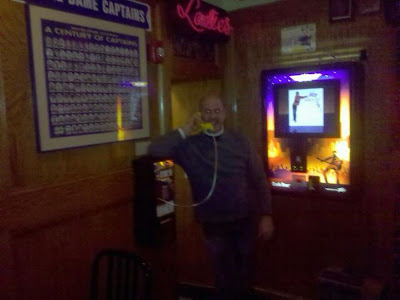 MW worked the beats... It was hit or miss all night but I'll give him a 6 or 7 on a scale of 1 to 10. Some old High School prom tunes mixed in with a few alternative rock songs. I was going to ask Brighty to grade the performance but he was too busy dumping beers all over the opponents.

Line of the night was...Hey Foley, can you keep score, AGAIN. Ups and Downs captain, "So does anyone else on your team even know how to keep score?" To that I say, we need train more people how to keep score so I can concentrate on drinking and gathering information for the blog.

We had a couple of guest appearances tonight.
Mikey "Shits" Adams made the show and complained about all of the packages he delivers. Browntown stopped by late night and we had a few after the match while talking about a new business venture. I never thought at 43 I would close a joint like The Pony room but when we make our first million I just might buy the place. Speaking of special guests rumors are stirring that Mikey T. might an appearance next week. MT you are on notice that if you do show up you will be responsible for writing next week’s dart update. The readers demand to be exposed to your special brand humor.