I just want to start out by letting everyone know that Jeffrey was on fire last night. Everything the kid did and said was gasoline!

I can't believe there are only 8 games left before the playoffs start. Time flies when you are having fun I guess. Not only was last nights game against the dirty hated Canadians but it also may of been a playoff preview. If the season ended today the Bruins would finish in 3rd and Montreal in 6th. Needless to say I WAS FUCKING GIDDY!

I met up with Welchie, Jeffrey and MikeyT at Mcgann's for some pre-game cocktails. Sadly, Rio and Big Bob didn't go to the game but we got Albie and his brother in law. That's not really a fair trade but what the hell - the more the merrier.WEEI was at the bar and their trivia question was what 2 numbers between 1 and 10 are NOT retired by the Bruins. Some fool won with 1 and 6 but Jeffrey (Told you he was on fire) goes well 10s not retired and that's between 1 and 10 so your question is bad. The guys response was only single digit numbers. Uhm then that would be between 1 and 9 there budso. No wonder no one likes WEEI anymore.

You remember Shawn, the bartender/magician? I had to check in with him and ask how Pats party was. From what I was told, Shawn showed up at the party to preform his show at 9pm and apparently Pat had already been removed from his own party for being shit faced. Sounds about right.

There weren't as many Montreal fans as there usually are. Bunch of pussies were probably afraid of all the shit they would take from the B's fans. 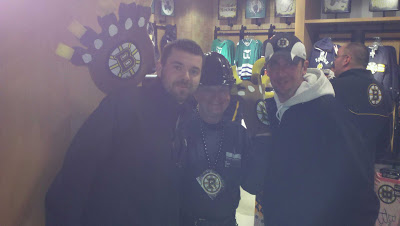 Welchie and MikeyT were in Lodge 19 while Jeffrey had secured us seats in Lodge 11: 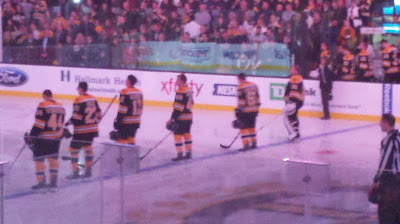 The B's showed up right from the drop of the puck. Just over a minute into the game Johnny Bombchuck let one rip right past Carey Price(Who would name their SON Carey? Thats a chicks name) and you could feel the whole building let out a collected sigh. Montreal just didn't seem to have it. The B's beat them to loose pucks, out worked and out skated them all over the ice. As they say the puck was bouncing the B's way at every point. Soupy(Gregory Cambell) scored a typical scrappy goal with about 7 minutes left in the 1st period and Nathan Horton heard a WOO with 2 and half minutes left. After 1 the B's are up 3-0 and I didn't miss one goal. Off to the Hub bar between periods. I think at this point Albie is all jacked up. He looks gray, his eyes are half open and I think he mumbled "rubble rubble ree" at me.

Halfway through the 2nd period they start trying to find the fan of the game. As they are zooming around the Garden they happen upon theGROWN MAN who is sitting in front of MikeyT and Welchie - BLAMMO them 2 fools are up on the big screen. Jeffrey has this on his camera and I'll share the picture when he down loads it. As Jeffrey was putting his camera away the lady next to him smashed into him, spilling his beer into his lap, down his leg and all over her.  Needless to say he was wet for the rest of the night. There was a weak fight between Mara and Soupy but nothing too exciting happening in peroid 2 except Welch and I dominated the Tune Trivia and MikeyT losing helmet shuffle for the 1st time in 4 years! On the way back to the Hub bar, Albie is running past me to go see Black Kerry and get his free beer. Thank god for small miracles. He looked like he had more color this time around. MUST BE SOME REALLY GOOD BEER! We all decide to throw up 5 bucks each for the 50/50 raffle. Needless to say we didn't win.

The 3rd period is high action. Back to back goals from Horton(2) and Mcquaid. Lots of hitting from the team in black and gold. After a goal from Kaberle the B's found themselves shorthanded 5 to 3 but with a tipped pass by Soupy and a burst of speed up ice,  he buried the B's 7th goal of the night.

This was one of the best games ever. The B's were on it and if they keep up this kind of play through the rest of the season they should be able to get far in the playoffs.

The night wasn't over though. There was talk about karaoke and how Jeffrey needs to work on a new song so we head to the Philips Old Colony House. The crowd was not into it at all. It kind of felt like we crashed someones lame party. We finished our drinks and moved onto the next bar, The Cathay Pacific.

Now this is more our speed. If you have never been to this place, it is like the bar in Star Wars. A mix of every creed and and every nation. Unfortunately, we didn't get the memo that this place is LEGIT. I think we may of stumbled upon Karaoke Idol or some shit. People were working the crowd. No one was looking at  the screen. Songs were being sung that I had never heard. This shit was heading down fast. Jeffrey is starting to get dejected, little did he know Welchie had an ace up his sleeve. A go-to place  back from when he was blacking out on weekends and waking up in various ladies beds. The Cafe De Paris over at the Common Market.

At this point I am sheenfaced (yes Charlie Sheen fucked up) and I probably couldn't tell you anything about the place but the karaoke crowd welcomed Jeffrey with open arms. He waited while people sang their shit but he was itching. He was debating a new song or his old stand by - These Eyes by the Guess Who. These Eyes won out. Needless to say he brought down the house. Cougars were cat calling him,  I think the Karaoke DJ gave him the eye, and there was talks of shots. Shots didn't happen and we left at 12:30. We banged out some late night Wendys and crashed. I would say this was an overall great day
Posted by d at Friday, March 25, 2011

no wonder you dont use your season tickets for every game. My goodness how much that night run you guys?