Bruins get it done

I know that I said I would be blogging after every Bruins game that I attended but I got lazy(or was it hungover) and have been slacking. Then at darts some of the guys say that I don't write enough or that I don't update enough. So I guess I am all around not keeping up my end of the blogging-reader relationship. Like anything else in life I will try harder. 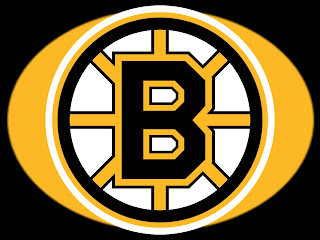 Last night MikeyT and I headed to the B's game. Who would of known back in October, that the Bruins would be battling the Tampa Bay Lightning for second place in the east this late into the season? The winner would also be 3 points back of the Philadelphia Flyers for 1st over all.

I think we found a new routine before the games. We have been getting an early dinner at the Grand Canal the past few games but we were still without an actual boozing bar. Throughout the season we have tried Beerworks, Northstar, the Harp and Sully's Tap but they just didn't have that good pregame vibe. Yesterday after having yet another great meal at the Grand Canal we were headed to Northstar to get our drink on but when we got there they weren't even open yet. I mean what kind of bar isn't open at 4:15 on game day? So we headed to...McGanns. We've been to this place often to eat but never really to pregame/drink and I don't know why not. We were welcomed at the bar like we had been coming there for years. Our new friend Patrick(from Quincy who likes to get into fights, drink beers and only follows the B's) invited us to his retirement party from Citizens bank tonight at The Point starting at 5. He even hired Sean(the bartender/magician) to put on a show for the ladies and make balloon animals. Patrick also fancies himself a Wes Welker doppelganger and currently started dating Kim, a week is a long long time in Patrick Welkers life. I know you are probably thinking "man you must of been hanging with Patrick and Sean all night" but this is all information that we received within 5 minutes of entering the bar. How could we not commit to this as the new pregame spot. Not to mention the beers are $4 and Mike G stops by when he misses his commuter rail train. All wins in my book and my heart.

Anyways onto the game. It was grocery bag night at the Garden. There were lots on Canadians in the crowd, not Canadian fans but Canadian people. I think it was to support all the French Canadians on the Tampa team. Tyler Seguin was a healthy scratch so that Daniel Paille could get some skate. They debuted a new Bruins opening and sadly Ozzie is no loner in it.

The beer lines were never long and that always makes me smile. I bumped into my friend Kelly who was running late to give out the grocery bags and she told me that Jack Daniels may want to be involved with the mustache pub crawl. I told her to give them me a call or hit me up on FB. 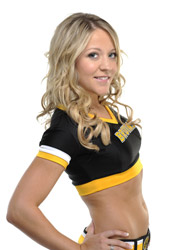 I am not going to lie, the crowd was kind of flat to start out the game but it slowly started to build. By the end of the 1st period the place was on fire. Tomas Kaberle doesn't show up in the stat sheet but he played his ass off, I am feeling better about that trade. Mike Smith, their goalie, played like he was the second coming of Patrick Roy or at least he thought he was.

Tim Thomas played lights out and let in a screened shot in the second period but other than that he was on top of his game. Also in the second period, Milan Lucic returned to the ring against Eric Brewer(who I just found out didn't sign with Dallas Mavericks), the fight was longer than it needed to be - win Lucic. With the B's down 1-0 Steve Kampfer tied it up with a blast from the blue line. After 2 periods they were all knotted up.

The third period featured some hard hits and some really good hockey. The Bruins battled for every puck and at times it seemed like Tampa Bay was just too fast but with just over 3 minutes left Lucic buried one top fatso. The place erupted, I was high fiveing everyone and anyone, Blades was rocking and rolling and I was smiling like a little kid. It was the first time in 3 seasons where I was at a game and I didn't miss a goal. I saw Tampa's goal and the two by the B's.  Winner winner chicken dinner.

On a side note: They kept showing a guy on the big screen with a sign that just said 35 lbs. I couldn't figure it out so I asked Mikey T and he goes matter-of-factly: "the weight of the Stanley Cup". I felt like such a dummy but hey you learn something everyday.

My next game is March 29th against last years Stanley Cup winning Chicago Blackhawks and now you'll know where I'll be.
Posted by d at Friday, March 04, 2011

Just an observation, but Ozzy is in the new bruins opening. Granted it is one of his new songs.