I have been hemming and hawing all day about writing a blog review of last nights game. I was coming up with all types of excuses for not writing it -  1. no one cares, 2. I am too tired 3. it will be too long; doing other things - prices for purchasing a Golden Tee machine, cost of a new light fixture, buying the shirts for the 4th annual mustache pub crawl - instead of it; and at one point flat out refusing to write - so I shut off my computer. Then I was thinking about it and I thought better of it.

So onto the review.

I started off my day yesterday fighting the man on some trumped up charges. They claimed I ran a red light and I claimed it was yellow but in the end justice prevailed and I walked away victorious. Derek 1 and the State of Massachusetts 0! So everything after that was gravy.

I met up with MikeyT and headed on over to the Garden to watch the B's vs the Blackhawks. I had this game circled on the schedule all year long. Basically the 'Hawks are everything the Bruins need to strive to be. A mix of young and old who won the Stanley Cup last year. Plus being an original 6 team makes the games all that more memorable.

On the way to the game we saw a man celebrating that he won the championship, he lost/spilled his last beer or he could of been crying from being hit by a car - either way there was a drunk man laying on the ground, near a cross walk, crying his eyes out. What truly happened the world may never know!

We grabbed a quick bite to eat at the Grand Canal and then off to Mcganns for some pregame beers. As I have stated before McGanns is good for pregame beers because the crowd is all Bruins fans and beers are only $4. Well as we are sitting at the bar bullshitting about life MikeyT's new best friend Steve Welch, from Dedham shows up. No, we had never met Steve before but Steve is one of those guys who likes to introduce himself, be loud and obnoxious and then tell you stories about anything and all things STEVE. Of course he makes Facebook groups to meet old high school sweethearts, of course he is going to the gym 3 hours a day so he can beat heredity, of course he drove his bike 200 miles on a drunk crawl, of course he is a master carpenter who built his house with his own 2 hands, of course he doesn't remember the 1980's because he was a monster coke head, of course he quit smoking cold turkey over 10 years ago, of course he loves his wife and can't wait to go on another cruise and of course I TOLD HIM MY NAME IS JIM and he proceeded to call me Mr. Beam for the rest of the night!! Thank god Steve buddy Billy showed up and we moved down a stool and Steve started harassing everyone else. The game started at 7:30 because it was on Versus and that meant a few more beers before heading in.

While walking in there was a homeless man with a sign that read 'Help a B's fan get drunk"? So as I was reaching for some singles MikeyT asked him if he "had change for a $5." I don't know if the sign holder wanted all of the cash or just really didn't have change but when he responded with a "No" Mikey Told him "Well, thats on you then" and walked away. I was laughing sooo hard that I gave the dude $2 bucks.

We found out a secret. If you are in the know. You bring your cups back up with you and my man will refill them and only charge you $5! I know there are only a few games left this year but UHM HELLO PLAYOFFS!! I have always heard rumors of this at Sox games but I've been shut off at some of them so I didn't believe it but now WE ARE IN and the Spring just got better. (On a side note what a day Im having. Didn't have to pay the $150 for the ticket and now I am getting 2  $7.75 beers for $5??) 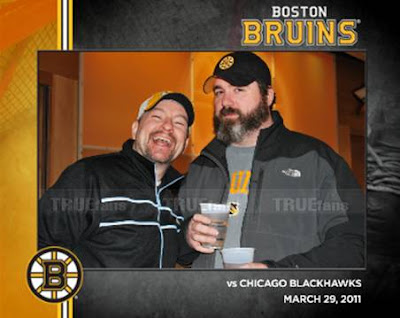 As is usually the norm,  I was not in my seats when the B's scored their 2 goals in the 2nd period. The 1st one I was walking out of the bathroom and the second I was in the beer line. I did catch Shawn Thornton get his face sliced up and the B's 3rd goal. MikeyT demolished the helmet shuffle but I had problems with the Tune Trivia - Faith No More'
s Epic. If you have been to a sporting event with MikeyT then you know he seeks out the fanfoto guys(pictured right). When I say seeks out I mean YELLS AND SCREAMS FAN FOTO GUY HERE HERE HERE and tells them HOW TO TAKE THE PICTURE. Its to the point now where I am shocked when he doesn't do it.

All and all it was a great last game of the season to attend. Now I can't wait to see who the B's get in the playoffs.  As always I am sure there is more things that I forgot but I get so Drunk Savard and forget.
Posted by d at Wednesday, March 30, 2011