Is it Friday yet?

We all know what Mondays are for, so we are going to jump right into it.

This is what I learned this weekend:
1. CVG wants to have a group outing to the casino. Who knew he liked to gamble?
2. I saw a little kid wearing a Ke$$el shirt at the B's game Saturday and I thought it was a brilliant shirt.
3. Kalin informed a group of us that she is not good at HJ's! That was one of the highlight of Folans B-day bash for me.
4. Brady Quinn and the whole Browns team is worse than the Lions.
5. Jeffrey doesn't like to lose when gambling and I quote " FUCK YOU DICK LICKING COCK SUCKER" - jesus man relax and have another Coors light.
6. The 5 o'clock bar tender change over is bullshit. Why do I have to cash out just to re-open a tab.
7. Mikey became Chief Tofuri of the Lovenacholaot tribe: 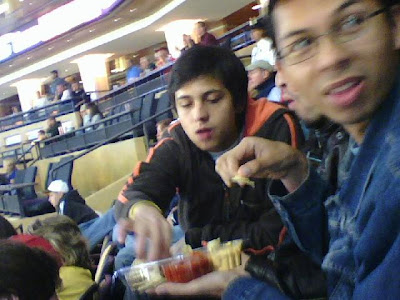 8. Who knew that Indians liked hockey and nachos?
9. Jeffrey just found out about Puck Sluts...apparently the dude has never been to a Bruins game.
10. Horses can't puke(I had to look it up):
Horses have a band of muscle around the esophagus as it enters the stomach. This band operates in horses much as in humans: as a one-way valve. Food freely passes down the esophagus into the stomach as the valve relaxes but the valve squeezes down the opening and cuts off the passage for food going back up.

Horses, however, differ from us because their valve really works. Humans can vomit. Horses almost physically can't because of the power of the cut-off valve muscle. Also, the esophagus meets the stomach at an angle which enhances the cut-off function when the horse's stomach is bloated with food or gas. Then the stomach wall pushes against the valve, closing the esophagus even more completely from the stomach. Normally, the mechanics are such that the horse's stomach ruptures before the valve yields.
11. DJ's at the Garden is still rocking on Saturday nights. I thought it would of died down by now but it has only intensified.
12. People don't think I can go the whole Bruins season without shaving my face. I am going to show them.
Posted by d at Monday, September 28, 2009