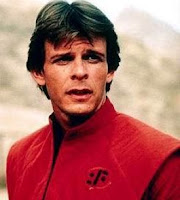 I’m taking a timeout from the fantasy weekly review because I’m really pissed off. I know, I know….I won the week so how can I be pissed off. First of all….if you know me than you know I can always find a reason to be pissed. Here is why….V is coming back and none of you Mo-Fo’s told me. For those of you under the age of 33 or 34 you may not remember V the mini-series which aired in 1983, but it was probably the best mini-series ever made. I’ve been talking about this show for years and always thought they should try and remake the series. Anyway, I’m watching TV last week and saw the commercial for V the Series that airs this November. Most people will look forward to what the show will be like since graphics and special effects are a million times better than in the early 80’s….but not me. I’m just looking forward to seeing the alien/human sex scene. And yes Chrissy, I’m well aware you probably already have some XXX rated bootleg version of the scene, but I’ll just wait for the TV version. Thanks 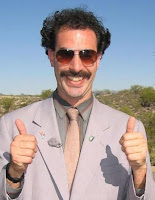 Genius…absolute genius. Congratulations Beach Bums, you get The Good Award for week 3. I know what you guys are thinking…how is that possible? Because BUMS is smarter than the rest of us…plain and simple. At first I was completely shocked to see that the bench players for BUMS had not only outscored his starters but they also outscored everyone’s starters. I mean how is that even possible????? But then it dawned on me while walking the dog….BUMS had found a loophole in the scoring system. Where does it say in the rules that your starters are the team of record? Why can’t your bench players be your team of record? Well done BUMS…..well done!

If only I had figured this little trick out in 2007 I wouldn’t have come in last. 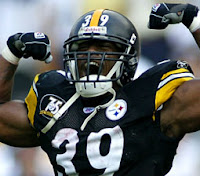 FAST WILLIE PARKER dammit! MUST START! Did I not send out a text earlier in the weekend? Seriously people we went through this same crap last year. If I tell you a player is a must start then you start him…end of discussion. What was I last year…13 for 17 on must starts? Somebody look this shit up…I don’t know what the exact numbers were but I know I was on fire with the must starts. With the Celek/Parker combo this week that makes me 3 for 4 this year. Do you bet against 75%? I don’t think so!!!

AND THE UGLY
I’m trying here…I’m really trying. It’s still early and I understand we are all trying to get adjusted to our rosters. But seriously guys…this is a bonafide cluster-fuck we got going on here. Roethlisberger 20 points (MIM), Santana Moss 33 points (MIM), Willie Parker 19 points (MFN), Kevin Walter 10.5 points (Smidawgs), Cotchery 25 points (FELONS), 49ers Defense 14 points (FELONS), Carson Palmer 15 points (WIZARDS), Julius Jones 19.5 points (BUMS), Knowshon Moreno 15 points (BUMS), DeSean Jackson 28 points (BUMS), Vernon Davis 24.5 points (BUMS), Pierre Thomas 29 points (IGGLES). All of these guys were on the bench and cost their teams at least 9 points. This is a looooong list and it’s possible I missed a few…what a mess. Come on people lets start paying attention to who starts and who sits.

TEXT OF THE WEEKEND

“Go 2 the bottom of the page and look @ the league leader all receivers on the bench” Sunday, 3:42pm…STREET PHARMACIST

Man did I love this text. So we are coming towards the end of the 1:00pm games and as we discussed earlier there were a lot of points being left on the bench this week. I can’t remember the last time I saw all the league leaders at one position on the bench this late in the day. But the real reason I loved this text is that PHARMACIST found the league leaders page and took the time to find each of them on their respective teams and confirm they were all benched. I see people logging on and off all day during the games and I always assumed they were just checking in on their own team. I didn’t realize there were other losers out there like myself that check all of the other teams. I guess it’s just nice to know I have some company in Loserville!

TEAM ONE-LINERS
Beach Bums
All joking aside…you do realize that if you played the right people you would have had a 178 point week. This is the team to beat people. 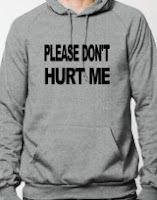 Lets be honest here…I’m not the most mentally stable person in this league. And if we took a vote of who goes postal in a shopping mall one day I would fully expect to receive 100% of the vote (yes I would vote for myself). But Smidawgs has got to get an honorable mention here…I’m very concerned that he is gonna blow a gasket one of these days. Every Monday I can count on walking into work and Smidawgs gives me the ‘we gotta talk’ look, I reluctantly go ahead and start a conversation but in the back of my mind I’m thinking this could be it for me. And 95% percent of the time he’s not even pissed at me but I’m still a little scared.

It’s OK Smidawgs…I love your energy but this is just fantasy football…you are starting to scare people.

Franklins Felons
Just between you and me FELONS….you gotta be a little disappointed in the Fitzy/Johnson WR combo. You know I’m a Johnson fan and I’m deep at the RB position. Call me kid…you make the right offer I may even pay the transaction fee.

Iggles
I just want to make sure I have this straight. I drafted Donald Driver last year figuring a young inexperienced QB (Rodgers) would need a veteran WR to be his safety blanket. So what happens? Yep…Rodgers throws to Jennings all year long. So this year I draft Jennings and this bastard Rodgers is now throwing to Driver all game long. Green Bay is about to go on my NO DRAFT LIST!

Most Interesting Men
Killin’ me….you’re absolutely killin’ me. I sing MIM’s praises last week calling them the team to beat, and this is why I picked them to win this year….blah, blah, blah. And this is how you repay me…..58.5 points. 58.5 freaking points!!!!!! Incredible. Somebody please tell me that these jackasses aren’t going to get paid for low week.

Sflabo
Terrell Owens=Team Wrecker. Sflabo is just the latest team that Owens (0 points) has ruined in his storied career. Don’t worry FLABO…you’re not the first and you certainly won’t be the last.

Street Pharmacist
Man I really like your team Street Pharmacist. Other than Vincent Jackson your team didn’t have a good week and you still managed 91 points. Just another PHARMACIST kind of week…hang in there and at the end of the year you wind up in the top 3.

Team Mung
When your kicker is the 4th highest scorer it’s never a good sign. Welcome to fantasy football kid. 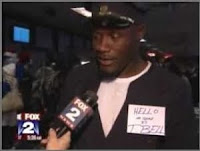 Be very careful here Mr. Roy E. Williams. I don’t know much in life, but I do know you never piss off the head Wizard. You needed to come up big Monday night for the Wizards to win their first weekly win EVER….and you cam up small.

On a side note: Has this been confirmed that the Wizards have never won a week? I know they haven’t won one since ADSL started but does this consecutive winless streak go back to previous fantasy football leagues? Just curious.
Posted by Iggles at Tuesday, September 29, 2009

I thought every1 knew about the updated V?

Scott Wolfe is playing the role that Mark Singer played. I dont think he can hang...

ive never heard of the v but i have heard of smiddawgs domination in fantasy football. i would love to be on his team.