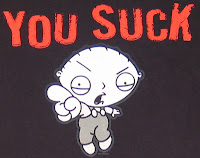 I know we focus on fantasy football here but I wanted to make a quick comment about the Jets fans on Sunday. As we all know I’m an Eagles fan so I think I can provide an impartial opinion when it comes to a Pats game. Now it was late in the 3rd quarter and the Jets were barely holding onto a 4 point lead. From the stands you can hear a very loud BRADY SUCKS chant. Now this is the exact reason why nobody respects New York fans. They can somehow manage to combine a lack of knowledge and crudeness all into one. Now I understand they are a frustrated fan base since they haven’t beaten the Pats in a million years but BRADY SUCKS? Really? Hey guys let me fill you in on a little secret…Brady is the GREATEST QB IN THE HISTORY OF THE NFL. When you chant Brady Sucks it makes you look even dumber than you are.

THE GOOD
All of you bastards laughed at me when I said MIM would win this thing. They have the best fantasy QB in football (Brees), they are 4 deep at RB (Johnson, Jacobs, Washington, and Jackson), 2 really good WR’s, and 3 above average WR’s. How many of you wouldn’t trade for line-up right now? I know I would. Now granted Chris Johnson may have produced one of the best fantasy days in history on Sunday but this team is really good boys and girls

THE BAD
Hello….Zach Miller…I’m looking for Zach Miller. MIM has won the week even though they managed to get a grand total of 0 points from their TE. I’m getting a little older so my memory doesn’t work as well as it used to. Didn’t MIM and Smidawgs have this exact same problem with their TE’s last year? Come on guys….pull a Franklins Felons and get a TE in the 3rd round next year so I don’t have to write about this anymore. 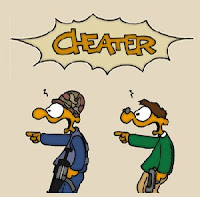 Now for the Ugly….I’m calling for a full scale investigation into MIM’s line-up. I checked their line-up (along with everyone else’s) at 12:57pm on Sunday and they had Welker as one of their active WR’s. Some of us in the league were even texting about it well after 1:00pm because everyone knew Welker was de-activated at least 2 hours prior to kick-off. So how did Welker miraculously wind up a reserve? I’m not going to come out and blatantly call MIM cheaters (which they are) but if it looks like a rat…smells like a rat…and acts like a rat…it must be a ………

This is what happens when you break the rules (i.e. not paying your freakin’ entrance fee) people start making accusations bitches!

TEXT OF THE WEEKEND
“ur unreal! Olsen goes off and he may kill u or me cuz I told him to pick up heap” MJT
Lets add the background to this text. We named Todd Heap a must start for Smidawgs this week over golden boy Greg Olsen. To be honest I was 50/50 on this must start but there weren’t many other options. Anyway, after Smidawgs moved Heap into his starting lineup I thought it was important to inform the league that he had made the change.

And just for the record….I do understand that there is a possibility Smidawgs may seriously injure someone (including me) if one of these must starts doesn’t work out. But for the shear entertainment value I’m willing to risk it and keep making Must Starts of the Week.

TEAM ONE-LINERS
Beach Bums
So when was it that BUMS realized he made a mistake by starting Peyton Manning. Was it late in the first half of the Houston/Tenn game when Schaub already had 25 points….BEFORE THE HALF! Or maybe it was when Schaub passed the 40 point mark in the 4th quarter. Now it is pretty rare that one of your players posts a 40+ point game,,,,,but when he is on the bench it must really hurt. Big OUCH!

From CBSSportsline Sunday, around 11:30am.
“Analysis: Jennings is a rock-solid No. 1 Fantasy option worth a start in all leagues going up against a good but not great Bengals secondary."

Rock-solid no. 1 fantasy option! Really? Well I beg to differ. This is exactly why the required injury reports are a complete joke. Jennings was listed with a mild wrist sprain and I have yet to find a place that made anymore than a slight mention of it. And then on Monday CBSSportsline had the balls to post this:
“Analysis: We should expect Jennings to play better in Week 3 at St. Louis. Look for him to come back with a big outing, and he likely won't go without a catch again this season. Consider Jennings a No. 1 Fantasy WR against the Rams.”

Seriously? You think he’s gonna play better in week 3. Well it couldn’t get any worse!

I’ll just give you a fair warning right now Mr. Jennings…I benched my #1 pick last week and have absolutely no problem benching you.

Franklins Felons
I’m just going to give you some advanced warning now FELONS. Mr. Benson is about to enter the MUST START zone.

Sflabo
You are stacked this year FLABO. Just wait until MJD and Holmes start scoring touchdowns for you. You are now my dark horse favorite to win the whole thing this year.

Smidawgs
Todd Heap baby…Todd FUCKING Heap! Ok, granted I only got you 1 extra point with my start of the week but it still would’ve been nice to get a thank you or something. Every point matters DAWGS….so you better start showing some respect. And by the way, you are not in last place…I AM. So quit the whining and complaining.

No worries MFN….Hasselbeck isn’t dead! It’s only a broken rib…I’m sure he can bounce back from that pretty quickly. Just look at how my boy Donnie Mac is dealing with his broken rib. But seriously….anyone who thought Hasselbeck was either dead or paralyzed raise your hand.

Most Interesting Men
See above you filthy bastards

Street Pharmacist
I don’t care if you changed your team name, I still have 2 words for you….FUCKIN’ SKZA. Every year you pull off this same crap….if you get bad production from your RB’s then your WR’s step up. The following week your RB’s score touchdowns but you get nothing from the WR. It’s incredible!

Team Mung
Since you’re the only new team this year you kind of win the Rookie of the Year award by default. But keep up the good work kid…and one more thing. I need your cell number just in case I need to call you about some trades. It will only be used in an emergency situation. Just ask the rest of the league. Haaaaaaaaaaaaaaaaa

The Slippery Wizards
Did you draft Hartley because his suspension automatically qualifies him as a Wizard? I had been meaning to ask but kept forgetting. And just in case you’re curious…John Carney (Hartley’s replacement) has 21 points so far. That would be 2 more than Longwell. Of course, in the end it won’t really matter if you keep getting 32.5 points from Dallas Clark.

FRED TAYLOR PRO BOWLER?
I can accept when I make a mistake. I thought this might be fun to keep track of Taylor’s stats throughout the year and maybe rank the potential AFC pro bowlers. Rank Taylor as the 6th best back one week, the 4th best the following week, etc…..but Taylor isn’t even putting up stats that qualify him as a top 15 back in the AFC. So until Taylor actually has a 100 yard game we are going to leave this off the weekly update and I’ll just look forward to spending my $20.
Posted by Iggles at Tuesday, September 22, 2009

OF COURSE THATS WHY WE DRAFTED HIM! and if carney having two more points, is the very least of the wizards problems IM IN LAST PLACE

How does the text of the week work? Is it only fantasy football related? I need to know these things. I mean if Rowdy Roddy Piper wishing you a Happy Fuck you Friday isnt a great text then I need to know the criteria...suck it Smiddy

I'll leave the text of the week open for the time being but football related would be preferred.