Well kids……here we go again. Before we get into the week that was we need to take a quick second to welcome a new team this year. TEAM MUNG joins the league with very little experience in fantasy football so we are all just hoping he makes it through the year without quitting. Just a quick question…..shouldn’t it be Team Mungo and not Team Mung? Now this is sort of a clean blog so I’ll just post a link to Urban Dictionary that defines what a Mung is. Not sure if he’s trying to psych us out or it’s an in depth look into the world of Tom. Either way…..I call ‘not sitting next to Mungo at next years draft’ first.

We are changing things up this year. The Costanza Award, Goose Egg Club (aka The Smidgy), and Cheerleader of the Week are retiring. But if you guys screw things up this year like you did last year Costanza will reserve the right to pull a Favre and un-retire. To start things off this year we will take a look at the Good, the Bad, and the Ugly of the previous week; the Text of the Weekend Award; one-liners for each team in the league. And when I say one-liners I really mean I’ll write whatever the hell I want to so it could be one sentence or a long paragraph……DEAL WITH IT! And away we go…… 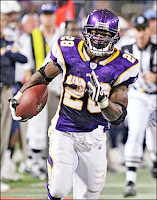 166 points in week 1? Let me repeat that….166 freaking points in week 1! Well done Beach Bums…what a week! Looks like BUMS is going to be a contender this year. Watching BUMS team on Sunday was like watching a pinball machine going Tilt for 7 straight hours. AP…an absolute beast just running over and around people, Manning being Manning, Jones running the rock like his life depended on it. Nice first week of the season BUMS!


THE BAD
Tough call on this one. We could talk about the injuries: McNabb, Urlacher, Gonzalez, etc…. but I’d like to go another route. Smidawgs and his 70.5 points. At the end of last year the ADSL Review Crew felt bad about how much we picked on Smidawgs and we vowed to spread the wealth when it came to criticizing teams. But Smidawgs you gotta help us out here a little bit kid….70.5 points? Really? The only thing I can tell you is it has to get better…I mean it can’t get any worse, right?

Now listen up people. I really don’t want to do the Costanza Award this year…I’m running out of quotes and I have no more Costanza pictures to use. But if we have a repeat performance of this past weekend you will give me no choice. And I’m just warning you now if the Costanza Award comes back he will not be happy. I mean seriously….this was a real shit show this weekend. Here are some lowlights: Flacco 34 points, Trent Edwards 22 points, Roy E. Williams 15.5 points, Thomas Jones 27 points, Tony Romo 37 points, and Fred Jackson 21.5 points. What do these guys all have in common? All of them were on the bench and outscored their starting teammates by 14 points or more! Not the way you want to start the year kids!

TEXT OF THE WEEKEND
“Hey Deegs did ur first 2 picks not get the memo? The reg. season started yesterday” Franklins Felons

Touche FELONS….touche! At the ADSL Review we aren’t just here to make fun of people we are also here to teach you all some lessons about life. Lesson #1 is don’t start bustin’ balls until the games are actually finished. I had sent the exact same text to FELONS because Fitzy and Andre The Giant were having horrible days. You can guess what happened next…B-West got pulled because the game was a blowout and the Bears offensive line decided not to block for Forte. And Fitzy scores a late touchdown. Uggghhhhh!

TEAM ONE-LINERS
Beach Bums
Could you please explain to the rest of us how in the world you contemplated for even a second not drafting Peterson first overall. Seriously!

Franklins Felons
Any chance of changing the team name back to JSL Enterprises? I’m just not feelin’ Franklins Felons. You are loaded at the WR position and weak at RB….give me a call when you’re ready for a trade. I’m 4 deep at RB.

Iggles
We all know about the Madden Jinx and the SI Cover Jinx. If my #1 QB gets hurt next season than I’m asking for the Iggles Jinx to be added to this list.

Madd Fucking Niggerish
Look at it this way Niggerish….the good news is your #1 pick had a horrible game and you still got 15 points out of him. The bad news is Seattle doesn’t play the Cardinals every week.

Sflabo
Looks like Sflabo may have a little QB controversy on his hands. What ya gonna do FLABO? Romo or Rivers? We still have to do some research but Romo could become our Must Start of 2009!

Smidawgs
Smidawgs…smidawgs…smidawgs…glad to see you picked right up where you left off last year – 70.5 points. I forget, can anyone remember if 0.5 points qualified for the Goose Egg Club last year? I think it did. Apparently Smidawgs is synonomous for TE’s not being able to score fantasy points.

Street Pharmacist
Darren Sproles…STEAL OF THE DRAFT…end of discussion. Too bad you didn’t play him. Look on the bright side PHARMACIST….your RB depth is the best in the league. Unfortunately now you have to decide who to start each week. Good luck kid!

Team Mung
Can we just name Mungo the Manager of the Year and get it over with right now? Hightower over Portis and it pays off bigtime! Great start to the year for MUNG. Does anybody else feel like MUNG is going to fall ass backwards into points all year long? This could be the year of the Mung….and if that doesn’t scare you than nothing will.

I have no idea what to say about the Wizards. This is a team that’s gonna put up 130 points one week and 79 points the next. Anybody want to hazard a guess on when the WIZARDS ownership starts throwing the new General Manager under the bus for a poor week one performance?


FRED TAYLOR PRO BOWLER?
Since me and Chiefdude have a $20 bet on Fred Taylor and his upcoming appearance in the Pro Bowl I thought it would be a good idea to keep track of his stats.

Chiefdude I’d like my payment made in $1’s please. It makes it easier for me to buy my coffee in the morning. Sucker!!!!!!!
Posted by Iggles at Tuesday, September 15, 2009