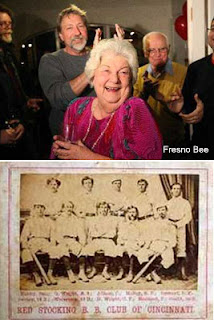 Remember Bernice Gallego? The lady who found an 1869 Cincinnati Red Stockings card while thinning her antique collection, put it up for sale on eBay with a starting price of $10 and then pulled it down after realizing it might be worth much more?

Turns out Gallego's hunch was right. After a three-week online auction, the Fresno resident sold what is believed to be one of history's first baseball cards for $64,073.

Not a bad paycheck for some spring cleaning.

The sale ended a whirlwind month for Gallego, who attracted an avalanche of attention on the front page of Yahoo!, the New York Times and other outlets across the country. Her popularity soared even further in late January, when she appeared on The Tonight Show with Jay Leno and revealed that this wasn't her first instance of blind luck. She once won $250,000 from a slot machine in Nevada.

Gallego embraced all the attention and kept a wicked sense of humor throughout the process, as evidenced by her first public remarks after the auction ended on Tuesday.

From the Fresno Bee:

"I'm so happy for the card. Oh and for me too, of course," said Gallego on Tuesday night. "I had hoped to bail out California from this financial emergency, but it didn't quite get that far. But maybe it'll bail out my credit cards."

Jeffrey Rosenberg of Tristar Productions was the winner of the auction. He runs an autograph show business and plans to display the card at shows around the country.

The actual final price of the card was $75,285.78, but that amount included a 17.5 percent buyer's premium for the auction house. Memory Lane Auctions says the price is a record for its house and that the last 1869 Red Stockings card sold for around $30,000.

Ever notice it is always old fucks that win the lottery who are going to die in 2 years or the fucking illegal alien mother fucker. This shit would never happen to me oh look an old baseball card oh and look its worth 75,000 dollars I tell you life is not fair.
Posted by ChiefDude at Thursday, February 12, 2009