An Indianapolis bakery is upping the ante on fattening foods and providing arguably the laziest development in fattiness yet. Say hello to our new friend, the Pizza Cone. 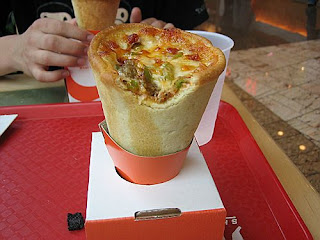 A group of investors and Italian inventors have handpicked a long-time Indianapolis bakery to help bring to the U.S. a newfangled food called Pizza Cone.

Pizza Cone is exactly what it sounds like: A cone made of pizza dough stuffed with ingredients like cheese, pepperoni and pizza sauce and then eaten on the go like an ice cream cone.

Taylor’s Bakery, founded in 1913, has signed an agreement with Hilton Head, S.C.-based Pino Gelato to be the sole producer of the cone for all of North America.

The equipment arrived at Taylor’s a few weeks ago and production is set to begin in a month.

“Everyone thinks it’s going to be the next hula hoop,” said John Allen, who runs Taylor’s along with his two sons, Matt and Drew. “It’s been very secretive and under the radar.”

Who is this “EVERYONE,” John Allen? What fat diabetic man with an eye for trends wired your house with a speaker and pretended that he was a higher power telling you that it was your divine mission to provide America with a fucking pizza that you can eat on the go? And theoretically a slice and a half worth of pizza to go isn’t bad, but you know it won’t stop there. The cones will eventually end up the size of a roadside cone and we’ll all eat them vigorously while hating ourselves the entire time. It’s kind of ridiculous that with people poorer than ever, for the most part, we’re eating like we’re decadent hedonists being fanned by manservants. But on the plus side, PIZZA…IN A CONE! BUY BUY BUY HULA HOOP BUY BUY.

THIS IS FUCKING BRILLIANT!!! Pizza on the go. No more sauce or grease dripping down your hands while you are rushing off to meet that super model for a date. I am a little confused by there being only 1 sole producer of the pizza cone though. Once a good baker breaks it down every pizza shop in town will be producing these mother fuckers (good thing I didn't give up swearing for Lent). Lets speed this process up and get the Pizza Cone in Boston ASAP!
Posted by d at Thursday, February 26, 2009

That picture looks like my green pepper, onions, pepperoni, and extra cheese from Cappy's all rolled up. I'll take 2 right now!