Really?? Did you have to hit her??

Ok....So as I was watching the Grammy's red carpet Sunday night, news broke out that Chris Brown had a "domestic violence" dispute early Sunday morning. My first reaction was WHATTTT never, not Chris Brown. Then I was thinking that bastard was he cheating on Rhianna?? Then as time went by we learned the gruesome detials that he beat on our beloved princess Rhiri!! Chris Brown who is 19 and Rhianna, 20, have been dating for a little over a year or so. They were spotted canoodling during the Grammy's last year. Then it was magic from then on. They seemed like the 'perfect' couple. He seemed so nice. GRRRRR...it gets me so mad that he did this because now I hate him. He has been suspended of his doublemint gum endorsement. I really want to know the truth! Did he really bite her? Really??

New details have emerged about the midnight altercation between Chris Brown and Rihanna that led to Brown being booked on a felony criminal threat charge on Sunday. "Chris knocked her around," says a source close to the couple. "Black eye, blood, bruises. She had to be treated by a doctor." The Barbados-bred beauty, 20 – who is currently in "a safe place," says a friend – is cooperating with detectives, according to the L.A. Times. Los Angeles Police Chief William Bratton has said he expects the case will be handed over to the district attorney's office on Tuesday or Wednesday. At that time, the prosecutors could charge Brown, 19, with more crimes. The case could be affected by how much Rihanna is willing to forgive her boyfriend. "Prosecutors back off somewhat when they see a couple trying to work out their own issues," says Steve Sitkoff, an L.A. defense attorney. But, says the friend, "I would be so sad if she went back to him." In the meantime, both stars have canceled upcoming appearances: The NBA has issued a statement that Brown will no longer participate in their All-Star Game events in Phoenix this weekend, while Rihanna backed out of a Friday night concert in Malaysia.
Friends Call Brown a Good KidNews of the alleged assault stunned fans and friends alike. Brown, known for his charm and Michael Jackson-style moves, has always been seen as a good kid. "I've never known Chris to be combative," says his high school gym teacher from Tappahannock, Va., Lyn Amos. "He's always low-key, easy-going." Adds Jean Segar, a restaurant owner who has known Brown since he was a child: "He's such a mild-mannered person. It's hard for me to believe [the charge]." What makes the allegations even more shocking is that Brown has claimed his mother was physically abused by his former stepfather. "He made me terrified all the time," Brown told Giant, adding, "I hate him to this day." The abuse allegations could have a long-lasting impact on Brown's career. 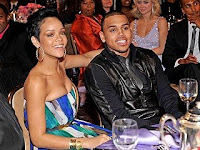 YES, i have a chance again!!