It's Friday on a busy sports filled weekend. There are movers and shakers on the Wanna B's list. Mover of the week is Justin Phelps. He jumps up from #18 to #4 after his purchase of a Cam Neely to go to a game later next month. He is also the same person who said getting Season Tickets was a "bad investment". Shaker of the week William J Smiddy from #4 to #13.

A couple of Jackie Edwardisms from last nights tough loss -
"I own this town"
"Three passes in a phone booth"
No matter if you love him or hate him Jackie Edwards does make the game more fun to watch. Whether you are laughing with him or at him he always makes me smile

I am pretty sure we will be going to Coops tomorrow night for the UFC. Should be a good set of fights. I hope George "Rush" St. Pierre gets his ass kicked by B.J. Penn.
I will be at DJ's on Sunday for the Bruins game and the Super bowl. Rumor has it they will be raffling off Celtics/Lakers tickets during the game. I am now designating DJ's as the Super Bowl SPOT! Please show up and invite your friends!! The more the merrier. 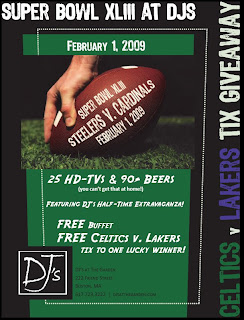 first penalty arizona LOCK IT UP