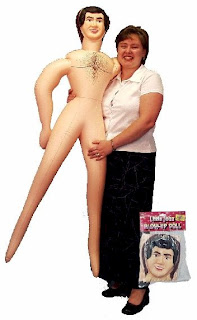 Police in Australia have arrested a man accused of breaking into an adult shop and having sex with blow-up dolls, it was reported Wednesday.

The 23-year-old allegedly broke into the Laneway Adult Shop in the northen Australian city of Cairns on several occasions, having sex with a doll named "Jungle Jane," the Cairns Post reported.

It earlier quoted the store's owner saying the burglar always cleaned up after himself, but the dolls were dumped unceremoniously in an alleyway behind the store.

"He has been taking the dolls out the back and blowing them up and using the dolls and leaving them in the alley," he said. "It is totally bizarre."

Police have charged the unidentified man, believed to be from the city's Manunda suburb, with four counts of breaking and entering. They told the paper that DNA samples had been recovered from one of the dolls.

"Following intelligence-based inquiries, we attended a Manunda address and made an arrest," police spokesman Jason Chetham said, according to the Post.
Posted by Just1Fig at Wednesday, January 21, 2009

I guess dolls are better than actual people...