Speaker of the house is out of her mind!!!! 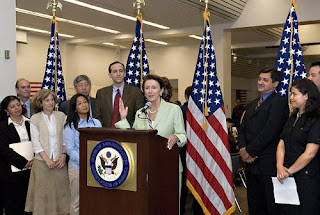 Adding a tax to your retirement is simply another way of saying to the American people, you're so darn stupid that we're going to keep doing this until we drain every cent from you. That's what the Speaker of the House is saying. Read below...............

Nancy Pelosi wants a Windfall Tax on Retirement Income. In other words tax what you have made by investing toward your retirement. This woman is a nut case! You aren't going to believe this.

Madam speaker Nancy Pelosi wants put a Windfall Tax on all stock market profits(including Retirement fund, 401K and Mutual Funds! Alas, it is true - all to help the 12 Million Illegal Immigrants and other unemployed Minorities!

This woman is frightening.
She quotes ..' We need to work toward the goal of equalizing income, (didn't Marx say something like this), in our country and at the same time limiting the amount the rich can invest.' (I am not rich, are you?)

When asked how these new tax dollars would be spent, she replied:
'We need to raise the standard of living of our poor, unemployed and minorities. For example, we have an estimated 12 million illegal immigrants in our country who need our help along with millions of unemployed minorities. Stock market windfall profits taxes could go a long way to guarantee these people the standard of living they would like to have as 'Americans'.' (Read that quote again and again and let it sink in. 'Lower your retirement, give it to others who have not worked as you have for it'.
Posted by Bigshow at Tuesday, January 20, 2009

Man Bigshow don;t you ever have anything uplifting?