WEST PALM BEACH, Fla. - A ninja, or at least someone dressed like one, is lurking in the shadows of Palm Beach County.
The Palm Beach County Sheriff's Office says a heavyset man with a visible potbelly and a ninja costume unsuccessfully tried to steal two different ATMs over the past two weeks.
Security video from the automated teller machines showed the unidentified man dressed in a black ninja outfit with a hood that showed only his eyes.
Authorities say the first attempt was made at a bank on Dec. 29 and the second at a Walgreens on Tuesday. Authorities did not say how the man tried to steal the machines.

Man stories like this make me smile. Right now there is a fat dejected man out there wondering when he can attempt to steal another ATM.
Let me tell you something chubby - NINJAS DON'T FAIL! Now get off your fat ass, throw on that Ninja outfit and make off with an ATM.
If not, next time dress as a Pirate and try to steal a Walgreens ATM. Everyone knows Ninjas are better than Pirates!! 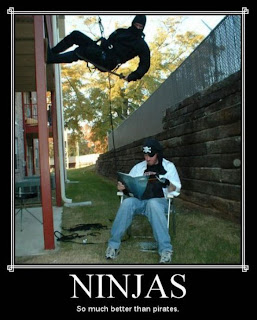 all signs point toward smiddawg!!

IS THAT WHAT YOU THINK?