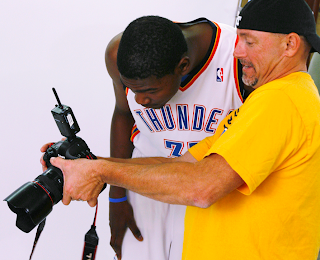 OKLAHOMA CITY — The NBA season is right around the corner and that means NBA teams had their respective media days recently.

Oklahoma City Thunder forward Kevin Durant expressed his displeasure with the team’s new appearance. After he was photographed by Layne Murdoch, right, Durant checked out his new uniform on Murdoch’s digital camera.

Immediately after tossing up his arms and blurting out “Are you fucking serious Murdy?” the forward swatted the camera out of the photographer’s hands, breaking it into tons of tiny pieces as it hit the floor.

Thunder officials say Durant then ripped off his jersey and began sprinting out of the Ford Center.

When he was finally tracked down nearly two miles away, he was asked about his actions. Durant told authorities the name “Thunder” gave the team a WNBA image.

“Why can’t we be something cool,” Durant asked, nearly weeping. “I’ve been a Longhorn and I’ve been a SuperSonic. Now I’m going to be a . . . a damn THUNDER?”

The OKC team will kick off 2008-09 competition in two weeks against the winner of WNBA Finals.
Posted by d at Wednesday, October 01, 2008