The race for the first three spots is getting tighter but before we get into that lets look at the week that was. Street Pharmacist pulled off a hard fought win with 113 points, Brandon Marshall’s 10 points on Monday night against the Pats was just enough to give him the win. D St Dirtballs has to be kicking himself today, coming up one point shy. I’m pretty sure that 0 point performance from Marquis Colston is not sitting well with Dirtballs. But let’s face it, other than not getting the win the real kick in the nuts is this may get D St Dirtballs another Costanza award. I’m just trying to help you out here Dirtballs, Colston isn’t gonna produce much until week 10.

We told you last week JSL, good luck holding onto the top spot with Romo nursing that sore pinky. 66.5 points aint gonna cut it kid. I was very excited for Defending Champs after a respectable 3rd place finish in week 6, I thought they were finally snapping out of it. Well……I wasn’t that excited since they still haven’t paid the entry fee yet. But I was hoping it would be close from top to bottom and we just needed the Champs and Dirtballs to pick up the pace.

Lots of injuries and suspensions this week. Larry ‘steal of the draft’ Johnson suspended this week. My sources have also told me there is another incident that happened in the past few days that has not been reported yet. Steal of the draft may be headed to NY to see the Commissioner. Matt ‘that isn’t my cocaine’ Jones out for a 3 game suspension. Kellen ‘I wasn’t in the hospital because my balls were the size of grapefruit’ Winslow is suspended for Week 8. Reggie ‘I like fat asses’ Bush tore up his knee and is out 3 to 4 weeks. At least the Wizards are deep at RB……….oh wait he just traded LT. My bad. Addai is out. Felix Jones…OUT! Earnest Graham is very upset to hear that Warrick Dunn is banged up, Graham may have to give up is fullback duties and return to pounding the rock. Not sure I have enough time to discuss the injuries to Clinton Portis? Shin, ankle, neck, and hip…..Ok I guess I did have enough time. Sammy Morris….knee. Maroney……done for the year!

Let’s take a break and look at where we are at after 7 weeks. Almost at the halfway point and the difference between first and 8th place is just over 100 points. I may be wrong but I think it’s the closest we have been after 7 weeks. Dirtballs currently sitting in 9th place are also starting to show some life and he has Route 36 coming back from broken ribs. Every decision matters now…..who do you pick up off the waiver wire, who do you bench, who has the better match ups? It’s all gonna matter at the end of the season. You wind up with too many Costanza Awards on the mantle at the end of the year and you will be looking at 4th place wondering what could have been.

Things I’m Thinking:
1.Please….I’m begging. This is the second week in a row a kicker had a second chance to make a FG because of those dumb last second time-outs. It must end.
2.Thinking about doing a draft review at the mid-point of the season. Bust of the Round, Steal of the Round, etc…..
3.Need you to come up big in Game 1 Cole. If not the Series may be over before it starts.
4.Tennessee Titans only undefeated team? Huh?
5.Who you gonna blame now Lions fans? Got rid of Millen and your team still sucks.

Before we get to the award we just want to remind Pharmacist. For the love of God (and I’m aetheist) start Roddy White next week. We are not going to warn you again. 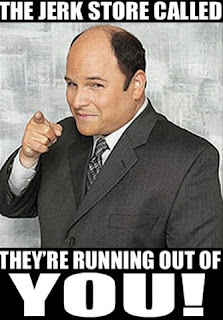 the chase, Dead Beat Dad left Antonio Bryant on the bench and started Donald ‘I miss Brett Favre’ Driver. This cost Dead Beat Dad 20 points and the win in week 7. Yes I know there are other nominees but lets be honest I’m excited to win the award this week. As I’ve stated many times in the past you are a lock to win the Costanza Award if you made a bad choice and it cost you a win. Doesn’t matter if I lost 20 points and someone else lost 40. If the 20 cost me a win and the other team couldn’t have won even if they started the right guy then I deserve the award. So I put on my best suit (well it’s my only suit but don’t tell anyone), I polished the shoes, I picked out a nice tie, and I wrote my acceptance speech. I even thanked my parents and I don’t even talk to them. So The Costanza Award winner for week 7 is Smidawgs!!!! Wait! What! Bad news Smidawgs you benched Lendale White and started Michael Pittman. That move also cost you the win for week 7 AND you lost 29.5 points which is 9.5 points more than me. Congratulations SUCKER you are the Costanza Award winner for week 7. Keep up the good work. 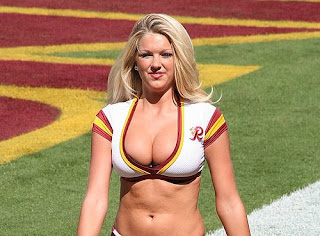 On a personal note we would also like to apologize to Smidawgs. A few weeks ago we went a little too far with Smidawgs. If you recall Marvin Harrison had a huge game while on the bench and we prematurely started eluding to the fact Smidawgs was going for the ultimate low by winning the Costanza and setting a new low week mark all at the same time. Unfortunately this forced Smidawgs (an avid Patriots fan) to openly root for Vincent Jackson while playing against the Patriots, a game which the Patriots wound up loosing. This incident was quite unfortunate. So we have thought long and hard about what we could do to make it up to them. We don’t know Smidawgs that well, so other than the Patriots we are only aware of one thing Smidawgs likes (other then his Mommy of course). And that would be the Ladies, and we all know what kind of ladies. So we have provided a special Cheerleader of the Week section for you Smidawgs. And remember we do apologize!

I like the recaps but how come the column on the left never gets updated? Its week 7 and this still shows Week 4?

Smiddog is jugglin 4 girls as we speak!! Quit hating on him