There is waaayyyy to much going on right now. The hockey playoffs are in full swing, the NBA playoff’s are now into the second round, couple of great baseball stories, and the NFL OTA’s are just wrapping up. I love walking into the office in the morning and seeing everyone dog tired from staying up night after night watching all of the games. Last night must have topped it for me….you had game 3 of the Pens/Caps series, the B’s were playing, then the Phils/Mets were on with a no-hitter for one pitcher and a one-hitter for the other into the 5th inning, and then throw in the Celtics trying to even up there series 1-1. And I think the Red Sox were on but I never managed to get them.

HOCKEY…I understand that most of you are watching the Bruins but this Pens/Caps series has been some of the best hockey I’ve seen in years. The goaltending has been great and the big stars (OV-1, Crosby, and Malkin) have been putting on a show. My only complaint is it would be nice to play one Eastern Conference and one Western Conference game each night. I understand that some arenas have other commitments and do not alter there plans for the NHL. But if you are a Bruins fan don’t you want the chance to watch the team you may be playing in the Eastern Conference Championship? And yes I still think the Bruins will win this series……at least I hope they do because I could go for a Yuengling! 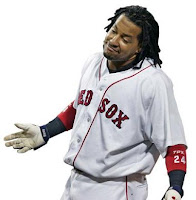 BASEBALL…yes Manny has been suspended for 50 games. And I’m sure this gives every member of Red Sox Nation a nice laugh. But does this stuff even matter anymore? Was it Steriods? A banned nutritional supplement? An over the counter cold medicine? WHO CARES! All of these guys are taking HGH anyway, which there is no test for. Now lets get into this whole A-Rod situation. Besides the steroids, in this book by Selena Roberts my understanding is there are accusations that A-Rod was ‘tipping pitches’. Who exactly is he tipping pitches too? Is there a rule saying you can’t do this? Maybe it is unsportsmanlike to do this but not against the rules. And before everyone starts treating the details in this book as ‘facts’…..please remember Selena Roberts was the same reporter leading the charge on the Duke lacrosse rape case. Anybody remember how that turned out?

NBA…I DON’T CARE. The Bulls/C’s series was great but I cannot take the NBA seriously when they show the same game on 2 different channels. There is no reasonable explanation why the C’s are on TNT and Comcast. NO REASON! If you want to watch the Celtics you are going to tune into the local announcers….so what ratings does TNT think they are going to get. Show another freaking game for the love of god. When I’m King of the World I will make this a law! No sporting event can be shown on 2 different channels.

FOOTBALL…does the season ever end? OTA’s have just ended and I need my football fix I just can’t help myself….I’m actually watching video of OTA practices. I know….I need serious psychological help. My second law as King of the World will be to banish the word/name FAVRE from the English language. Please just retire and stay retired….a few words of advice for you Brett……IT IS OVER! Oh yeah and one more thing….don’t worry ChiefDude I’m sure the fact Fred Taylor hurt his wrist before training camp even started is nothing to worry about.

theres no such thing as red sox nation. made up term by non fans

the same fans that were upset that they were called pink hate nation.