It's a Celebration Bitches 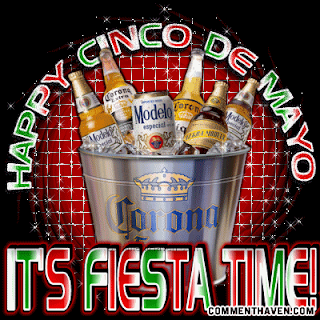 Cinco de Mayo (Spanish for "fifth of May") is a regional holiday in Mexico, primarily celebrated in the state of Puebla, with some limited recognition in other parts of Mexico. The holiday commemorates the Mexican army's unlikely defeat of French forces at the Battle of Puebla on May 5, 1862, under the leadership of Mexican General Ignacio Zaragoza Seguín.

While outnumbered, the Mexicans defeated a much better-equipped French army that had known no defeat for almost 50 years. However, Cinco de Mayo is not "an obligatory federal holiday" in Mexico, but rather a holiday that can be observed voluntarily.
While Cinco de Mayo has limited significance nationwide in Mexico, the date is observed in the United States and other locations around the world as a celebration of Mexican heritage and pride. However, a common misconception in the United States is that Cinco de Mayo is Mexico's Independence Day, which actually is September 16 (dieciséis de septiembre in Spanish), the most important national patriotic holiday in Mexico.

In 1861, Mexico ceased making interest payments to its main creditors. In response, in late 1861, France (and other European countries) attacked Mexico to try to force payment of this debt. France decided that it would try to take over and occupy Mexico. France was successful at first in its invasion; however, on May 5, 1862, at the city of Puebla, Mexican forces were able to defeat an attack by the larger French army. In this Battle of Puebla, the Mexicans were led by General Ignacio Zaragoza Seguín. Although the Mexican army was victorious over the French at Puebla, the victory only delayed the French invasion on Mexico City; a year later, the French occupied Mexico. The French occupying forces placed Maximilian I, Emperor of Mexico on the throne of Mexico. The French, under U.S. pressure, eventually withdrew in 1866-1867. Maximilian was executed by President Benito Juarez, five years after the Battle of Puebla.

According to a paper published by the UCLA Center for the Study of Latino Health and Culture about the origin of the observance of Cinco de Mayo in the United States, the modern American focus on the people of the world that day first started in California in the 1860s in response to the resistance to French rule in Mexico. The 2007 paper notes that "The holiday, which has been celebrated in California continuously since 1863, is virtually ignored in Mexico."

The holiday of Cinco de Mayo is primarily a regional holiday in Mexico. There is some limited recognition of the holiday in other parts of the country. For the most part the celebrations combine food, music, and dancing.
In Mexico City, like the rest of the Mexican capitals, all the young men who serve the military services pledge allegiance to the Mexican national flag and the institutions that it represents.

In the United States, Cinco de Mayo has taken on a significance beyond that in Mexico. The date is perhaps best recognized in the United States as a date to celebrate the culture and experiences of Americans of Mexican ancestry, much as St. Patrick's Day, Oktoberfest, and the Chinese New Year are used to celebrate those of Irish, German, and Chinese ancestry respectively. Similar to those holidays, Cinco de Mayo is observed by many Americans regardless of ethnic origin. Celebrations tend to draw both from traditional Mexican symbols, such as the Virgen de Guadalupe, and from prominent figures of Mexican descent in the United States, including César Chávez. To celebrate, many display Cinco de Mayo banners while school districts hold special events to educate pupils about its historical significance. Special events and celebrations highlight Mexican culture, especially in its music and regional dancing. Examples include ballet folklórico and mariachi demonstrations held annually at the Plaza del Pueblo de Los Angeles, near Olvera Street. Commercial interests in the United States have capitalized on the celebration, advertising Mexican products and services, with an emphasis on beverages, foods, and music.

Cinco de Mayo celebration in St. Paul, Minnesota
Events tied to Cinco de Mayo also occur outside Mexico and the United States. For example, a sky-diving club near Vancouver in Canada holds a Cinco de Mayo skydiving event. In the Cayman Islands, in the Caribbean, there is an annual Cinco de Mayo air guitar competition. As far away as the island of Malta, in the Mediterranean Sea, revelers are encouraged to drink Mexican beer on May 5.
Posted by d at Tuesday, May 05, 2009