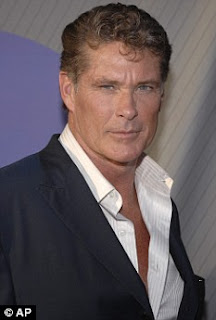 The Hoff's 16-year-old daughter had to call his ex-wife Pamela Bach to make the emergency rush to hospital, where doctors 'saved his life'.
A source told the celebrity website RadarOnline Hayley kept 'slapping her dad's face' to keep him alive after finding him on the floor at his Los Angeles home.
The source is quoted as saying: 'He was barely breathing when they got him at the hospital.

'He's recovering. Pam was at his bedside till 4am this morning. This is about the seventh time he's been taken to a hospital over the last few years with alcohol poisoning.

'How many visits will it take before he dies?'
Recovering alcoholic Hasselhoff was reportedly taken to the Cedars-Sinai Medical Center in Beverly Hills.

He is said to have had an alcohol level of .39 - more than four times the legal limit for driving in California. 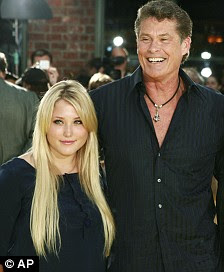 Hasselhoff was reportedly found unconscious by his daughter Hayley, pictured above, and, below, with ex-wife Pamela Bach who was at his bedside 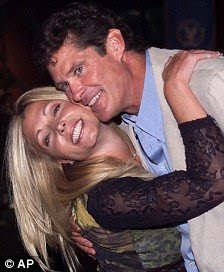 RadarOnline reports a source claims the Hoff has been hospitalised 'at least 10 times' in recent years, many of them unreported.

Hasselhoff was treated for alcohol poisoning at the same hospital in October 2007 after another lapse.

He was infamously filmed by his daughter trying to eat a hamburger while lying on the floor after falling off the wagon earlier that year.

Despite widespread reports, Hasselhoff's spokeswoman Judy Katz told TMZ.com: 'He's fine and well and happy and is celebrating his father Joe Hasselhoff's 80th birthday tonight at dinner ... along with his girlfriend, Kimberly.'

The actor's lawyer has accused his ex-wife of being behind the story of the alleged hospitalisation and is 'in violation of the court order precluding contacting the media regarding her ex husband'.

I don't know whats more impressive the .39 blood alcohol level, almost 5 times the legal limit, or the fact he has been hospitalized at least 10 times in recent years? I remember the drunk cheeseburger incident but I can't recall any other times. Maybe I have been too wrapped up in my own drunkenness to see that the Hass's world
is falling apart.
Posted by d at Monday, May 04, 2009