Lots to talk about

It is Wednesday and we have tons to chat, talk and bullshit about.

The B's host the Sabres tonight. Should be a good match up. The B's are 8-1-1 in their last 10 games. The band wagon is filling up people. You have EIGHT DAYS till the cut off. After that you will be put on THE WANNA B'S LIST. Every Friday I will update THE LIST with new names of the Wanna B'S!!

Since the Bruins are doing such a bang up job lets give a little love for Rene Rancourt, Bruins national anthem singer extraordinaire: 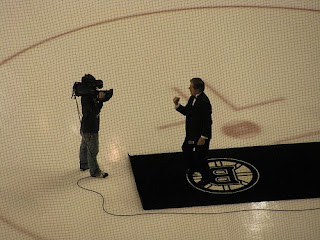 Rene Rancourt (born 1939 in Lewiston, Maine) is a professional singer. He has sung the U.S. and Canadian national anthems at Boston Bruins home hockey games for over 30 years. Rancourt is such a part of the Bruins' establishment that he is the only person mentioned by name in the Dropkick Murphys' song: "Time to Go". He does not have a contract with the Bruins. According to Rancourt, "I’ve never had a contract; I’ve always just shown up and I’ve become associated with the Bruins."

Rancourt first began singing the anthem in Boston at Fenway Park. He took part in an opera singing audition on the radio and was heard by John Kiley, long-time organist at both Fenway and the Boston Garden. Rancourt sang before Game Six of the World Series in 1975 when singer Kate Smith cancelled her appearance. Rancourt's ambition was to become an opera singer. The strength of his trained voice overcame the acoustic shortcomings of the old Boston Garden. In 1976, he began singing regularly for Bruins games.

Rancourt still performs the anthem before Bruins games, as well as singing at auto races, charity events, and nursing homes in and around New England. Rancourt has not publicly revealed his age, although a 2004 Boston Globe article gives his age as 60-something. 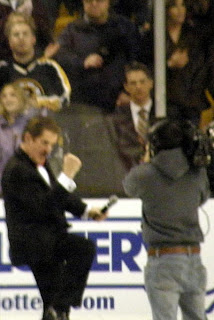 Quick story about Rene - A few years back, Mikey T and I are pre-gaming at Who's on First for the RED SOX/ORIOLES opening day. Guess who was drinking and hanging out, Rene Rancourt. He went on stage about a 1/2 hour before game time and starts singing the National Anthem. About 3 lines into the song, he stops and tells everyone singing along to "Shut the fuck up, you can't sing it as good as me". The whole place went nuts. Good times had by all.

The Celtics are 10-2 on the year. They won last night 110-101 over the Knicks. KG did not play, after being suspended for bitch smacking Andrew Bogut - bitch wanted some bitch got some.
Scal after hitting his monstrous 3: 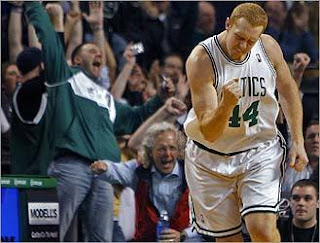 Lil D won the MVP of the American League. Congrats to him. He should be a good player for a long time. 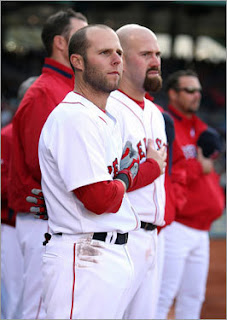 After a few rough weeks the dart team is back on track. We won last night 8-3. We only have 2 weeks left to make the playoffs. This is our last push. Danny AKA Gary is quitting the team after this season. He does NOT want to play the winter season. Does anyone else want to join the dart team? We always have room for 1 more.

This Saturday BC plays Wake forest at 3:30 and then the Bruins play the Canadians at 7:00. Seems like a nice way to spend a Saturday afternoon/evening.

GARY IS QUITTING?? WHAT BROUGHT THAT ON?? I BLAME OBAMA

Wanna B's List? OK I'll admit it...that's pretty good! Am I allowed on the bandwagon or not? Just wanna know what my options are.