Thank you everyone for coming on Saturday!! It was a huge success. OK so here is some entertainment news...

The Cheetah girls are no longer invited to perform at Macy's Thanksgiving Day parade. Because of the scandalous photos that were floating around of Adrienne Bailon. An insider said that "The Girls were scheduled to be in the parade and perform, but after Adrienne's recent photo incident, organizers didn't think it would be appropriate to have her at a family-oriented event."

Alot of you either still or maybe a mother, older sister, girlfriend, friend..have one time or another watched the soap opera Days of Our Lives. Marlena and John Black have been characters on that show since I can remember. The two were given the ax this week and will tape there last episode to air in January sometime. The show without Marlena and John is just going to be plain weird. But I am more a GH girl so this news doesn't really effect me!

Twilight had it's world premier yesterday and Robert Pattison was quoted that he "was going deaf" with all of the screaming that was happening on the red carpet. I can just imagine what it was like. I witness Twilight mania last Friday night at the Square One mall where it was a fanatic frenzy, girls were crying and screaming because Rob Pat was having a meet and greet at Hot Topic. Twilight comes out this Friday nationwide. 500 theatres are sold out of tickets for the midnight show on Thursday!!! I am telling you, go and see this movie, you won't be disappointed.

Tonight, 90210 is airing and in the upcoming scenes we saw Brenda in the hospital and Kelly was there visiting her! I am praying that it is going to be a routine procedure and there is nothing wrong with Brenda. Rumour has it that she may be dying!! NOOOOOOOOO!! 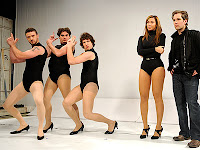 Justin Timberlake made a surprise appearance on SNL this week as a backup dancer to Beoynce to her new single, All the Single Ladies. It is HILARIOUS! Check it out on YouTube.
Britney Spears has a new album coming out on December 2nd. Unfortunately for her someone leaked this on the Internet this weekend. Reviews have been good! Along with her album dropping she is also doing a MTV Special November 30th which is a 90-minute documentary, Britney: For The Record.
Ashlee Simpson is about to be checked into the hospital and be induced! I don't know about you, but I feel like she has been preggers forever!!
I am heading to NYC this weekend...maybe i will have a spotting of someone famous!!
Posted by stylegal at Tuesday, November 18, 2008

I do NOT know why Smiddy never makes it to the entertainment update!!

No blog is big enough for a smiddy update. Only raw video footage could give it justice.

i knew this cheetah girl was hott back when she was in 3LW at the tender age of 17... mmmm i use to rub myself watching those videos!!


on another note, i think stylegal should go back to more 90210 updates! i am totally ADDICTED to it!!

I think you are all perverts...especially Mr. Iggles

style gal taking road trips and iggles cant get the adsl team together for a blog entry?? bullshit