Here at Costanza Central we have 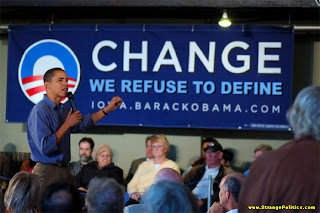 been moved by the world altering events that have taken place in the past week. A week ago today the country nominated an African-American (that’s a negro for those readers from an older generation) to be the 44th President of the United States. Barack Obama was elected based entirely on one theme: CHANGE. This has caused us to reflect on our past actions and have decided that we too are going to CHANGE. So no more criticisms, no more funny names (or not so funny depending on your perspective), no more pictures that are demeaning to women, no more awards, no more ‘Things I’m Thinking’, and no more Costanza Award. You wanted a Fantasy Football Review then you are going to get one. We are going to take to heart the comments from one of the most important cultural figures of the 80’s and 90’s: "if I can change... and you can change... everybody can change!" You tell ‘em Rocky, we all can CHANGE damn it! 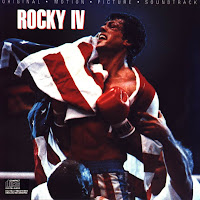 Usually we would start by reviewing the contenders for a Goose Egg Club nomination. Normally we would have talked about Defending Champs getting 0.5 points from Steve Smith, or the 0.5 points Kevin Faulk posted for JSL Enterprises, and maybe the 0.5 points Madd Fucking Niggerish got from Donald Lee. We might have even mentioned the 1.5 points The Slippery Wizards got out of Owen Daniels and possibly the 1.5 points Anthony Fasano got for Smidawgs. In the past we would have tried to make the argument that since 0.5 points actually starts with a ‘0’ you would be eligible for a membership. But we are all about CHANGE at Costanza Central so there are no new members to the Goose Egg Club this week. Remember people this is being done……all in the name of CHANGE!

Congratulations to Sflabo getting the big win this week. I know what everyone is waiting for but it’s no big deal that DeSean Jackson (I’m not calling him ‘too soon’, no nicknames this week) outscored both of FLABO’s wide receivers. What’s important here is getting the win and moving into second place overall. Good work FLABO, and remember this week’s positive column is being done….. all in the name of CHANGE!

I’ll be honest this is the 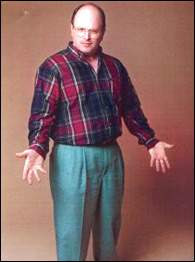 toughest part of CHANGE! No more Costanza Award. It’s like asking me to only drink one cup of coffee a day, quit smoking, and lose 20 pounds all at the same time. But we all have to make sacrifices in life so I guess I’m just doing my part. So we will not be talking about Willis McGahee putting up 28.5 points while on the bench for Nacho Papa. Not going to mention Bo Scaife and his wasted 18 point performance for Smidawgs. We’re definently not going to take this opportunity to mention the 20.5 points Steve Breaston got for JSL while sitting on the bench. We all know why there is no Costanza Award this week (say it with me) ……..it’s being done ….. all in the name of CHANGE!

You know what, after reading over this I realize that this sucks. I hate change. Nothing good comes from CHANGE. Every time you try to CHANGE something it always comes out worse. With that said….goose egg is a synonym for the number zero. So if you scored 0.5 points you got a goose egg. So we would like to welcome CHAMPS, JSL, and NIGGERISH as our newest members of the Goose Egg Club. Good work boys!

Kendra Wilkinson. Could be the first time in history you’d want to invite your fiancées friends to the bachelor party. Man I need to get invited to this wedding. It would be like a dream come true, I get to meet a bunch of Eagles and hang out at the Playboy Mansion. Anybody have the over/under on how long this marriage lasts? I'm going under 1 year.
2. Last 11 games decided by 7 points or less…..record is 1 win and 10 losses. Thank you Eagles this is one of the main reasons I am the way I am.
3. Be honest FLABO, were you getting nervous Dead Beat Dad was going to catch you Monday night? Be honest, Costanza doesn’t like liars.
4. He may not ever become a great head coach but Mike Singletary sure does make it interesting.
5. Why are they still announcing MLB season awards? World Series finished like 2 weeks ago. Why not announce them during the playoffs when people are actually paying attention.

Now for you FLABO. It is a big deal that ‘Too Soon’ outscored both of your wide receivers……COMBINED!!!! Listen people Costanza is here to help you. 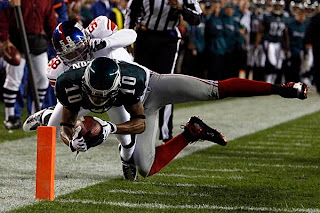 We specifically said DeSean was a must start and yet you benched him to spite Costanza. I know what you’re thinking FLABO ‘what’s the big deal I still won the week.’ This thing is going to come down to the wire and every point counts. You would be kicking yourself at the end of the year if those 5.5 points was the difference between 1st and 2nd place.

NACHO and JSL your next. Costanza Central has now launched a full-scale investigation into the scoring system at ADSL. NACHO, in the third quarter of the Sunday Night game your bench had outscored your starters 86.5 points to 86. That would have guaranteed a Costanza Award. But then on Monday morning your bench dropped down to 85.5 points. Hmmmmmmm….Manning was your only inactive player and he didn’t have any turnovers for the rest of the game so we’re not sure how your point total dropped. Now listen very carefully JSL. We try not to take other peoples ideas but this one is sooooo true we needed to post it. Steve Breaston is the next Roddy White, don’t make the same mistake PHARMACIST did. The owner of this idea is a very private person so we are not going to post their team name unless we get permission. With that all said, JSL you are winner of the week 10 Costanza Award. Congratulations on getting the Costanza and Goose Egg Club membership in the same week. I could be wrong but didn’t somebody mention last week that bad things were going to happen to you in week 10? Hmmmmmmmm!

On a serious note, we are going to take this opportunity to make some CHANGES. The Cheerleader of the Week and the Start of the Week segment is going to move to a second entry that will be posted later in the week (probably Friday). We are going to give this a try for one week and see how it works. But I must worn you this may cause trouble in the IGGLES household. So in the event I wind up getting divorced because I’m spending too much time doing blog entries I may need a place to stay. My requirements are very simple:
1. I must have access to a good coffee machine (I’ll supply my own coffee, cream and sugar).
2. A smoking area (not necessarily indoors but it would be nice) will be needed.
3. Access to a TV with NFL Network is important. If you don’t already have a DVR I will provide one (can’t miss my shows).
4. Internet access is a must. Wireless is OK and I’ll bring my own computer.
5. I’m usually up at all hours of the night so you need to be prepared to deal with this. On top of that I’m up at 4:30 am on weekdays (5:30 am on Saturday and Sundays).
6. If you have a dog it would be a bonus.
7. If you have children you may need to ship them off to Grandma’s house for a few weeks. If I liked kids I would have one by now.
8. I don’t really like people so don’t expect a lot of conversation. I’ll probably talk to the dog more than I talk to you.
9. I must admit I’ve been known to be a little moody. So you can expect dramatic swings in my temperament, you’ll get used to it after a few weeks.
10. And most important

(other than the coffee and smoking area) is I travel with Eagles posters, jerseys, helmets, and other Eagles paraphernalia. I will need a place to display these items. Don't worry I won't put an Eagles flag or inflate my Eagles 8 foot Linebacker on the front lawn (no promises about the backyard).
11. Not a requirement but it would probably be a good idea to have a defibrillator available. It’s only a matter of time until my first massive coronary.

Other than that I’m a great roommate.

There are 2 things I want you to take away from this post. CHANGE for the sake of change never works. Only a well thought out long term plan will make things better. I hope the 52% of you that voted for CHANGE remember that next time you vote. The second thing is simple: DON’T MESS WITH COSTANZA!

Good luck next week!
Posted by Iggles at Tuesday, November 11, 2008

man that was tremendous!! constanza on a bender type stuff!! just an idea but maybe smiddy's basement level apartment if things dont work out at home?? CONSTANZA MUST LIVE ON

I'm nothing if not honest...I thought you won this week when the review was already written less than 5 hours after the games ended.

Iggles would be more than welcome to stay in the basement. It would be like the son I never had.

I don't think I can bare to have William and Scott living in the basement level apartment...

Man, I have more respect for your girl now than ever ! How lon has she been putting up with you ?
Dirtball Central

I've been asking myself that same question everyday for the past 10 years. Maybe I should marry her?