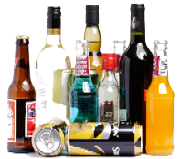 Ok….first off I would like to remind everyone to come to the Pub Crawl this weekend! It is going to be a lot of fun for a great cause! 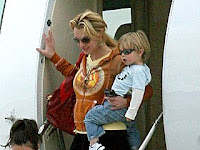 So Britney Spears 2 year old son, Jayden James was admitted to the hospital the other night due to an allergic reaction to something that he ate. It was reported that he was having seizures which was completely untrue. They were released last night! Have a speedy recovery JJ!

The girls next door Kendra Wilkinson is now engaged to football star Hank Baskett. After Hef gave her the heave ho……she moved on quite quickly. So didn’t her other fellow roommate Holly Madison who has been seen with Criss Angel all over Las Vegas recently.

It has been confirmed that Spidei (Heidi and Spender) will be appearing in an episode of How I Met Your Mother. Taping for there episode will begin today. "They will be playing magazine cover-versions of themselves as Marshall (Jason Segel) desperately searches for a place to “read a magazine” while at the office," CBS said in the statement. "Montag and Pratt will taunt and tease Marshall from the confines of his current copy of Them Weekly-USmagazine.com

Racy photos of Cheetah Girl Adrienne Bailon have hit the web. Bailon, who dates Robert Kardashian Jr., save scandalous photos that she shot of herself for her boyfriend on her laptop which was stolen at an airport in NYC. I wonder what Disney is thinking?? Another one of their “sweethearts” gets in trouble….. 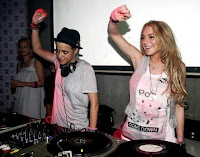 y obvious who I'm seeing," she tells December's Harper's Bazaar. "I think it's no shock to anyone that it's been going on for quite some time. ... She's a wonderful person and I love her very much." But when asked if she was a bi-sexual, Lohan, 22, says, "Maybe. Yeah." A lesbian? "No," Lohan says. What do you think???
As you know, I love the Twilight series. Well the actors that are playing the characters in the book have been on a tour to promote the film. Hot Topic has sponsored this. Robert Pattison (Edward Cullen) will be in MA Friday at Hot Topic at the Square One Mall in Saugus. http://community.hottopic.com/hottopic/Events/110508_Twilight.asp
I want to go so badly, but not sure that I can deal with all of the screaming teenagers. I am going to pass on this in hopes to meet a real Edward Cullen one day :)
I just read that Jesse Metcalf, Katie’s step- mom taught him in grade school, from Desperate Housewives fell 40 feet from a balcony in an after-party for the World Music Awards in Monaco on Sunday. Crazy enough…no bones were broken…….

Now that's what I'm talking about. I would've never known about Spidei unless you keep us updated. Keep up the good work.

only thing that keeps me coming back to this site!what about lidsey lohan saying about time we had a COLORED president?? woweee who says colored anymore??