SUCK IT UP VINCE!! 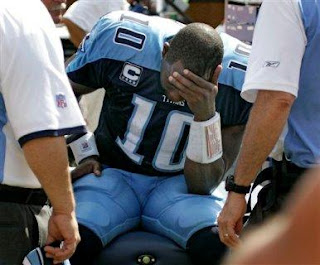 What in the wide, wide world a sports is a' going on with Vince Young? In the last three days:

* He got all pouty-faced after getting booed for throwing two picks Sunday. People who witnessed it said he seemed to be emotionally checked out of the game and appeared unwilling to go back on the field.
* After a three-and-out by the Tennessee defense, the offense took the field, only without their QB. “I came on the field and 10 wasn’t in the huddle. I didn’t know what the situation was,” said center Kevin Mawae.
* Jeff Fisher then began yelling at Young on the sidelines and it looked like he practically shoved Young into the huddle.
* After the game Fisher told reporters Young told him his hamstring was bothering him (he never told the trainers) and that's all their conversation was about.
* Three plays later, Young left with a knee injury, stuck around for an hour after the game and left without answering questions.
* Monday night, Fisher called the Nashville police over concerns that Young was emotionally distraught and might hurt himself. The cops found him in his car with an unloaded pistol in the glovie.
* Today the Titans issued this statement: “Last night, we received a call from people that are closest to Vince informing us that he had left his house in a state of mind that had them concerned; and that he was unreachable..."
* Now Young's agent is saying that everything is super swell. Young was on his way to a buddy's house to watch MNF, nothing more to be seen here, folks, let's all go home citizens.

What the hell is that all about? Right now no one knows whether Young has serious mental problems, can't handle having mean things yelled at him from the stands, or if he was just on his way to watch Mike, Mike & Mike call the Denver-Oakland game. I do know this: It's times like this that reminds me of all that is good about rooting for the Patriots. Vince Young goes out for a few weeks with a knee injury and Jeff Fisher... who's the longest-tenured coach in the NFL... finds himself presiding over a media circus that makes the Terrell Owens suicide attempt saga look like C-SPAN. Meanwhile, the Pats lose Pigskin Jesus for the year, he walks off the field battered but proud like Marlon Brando at the end of "On the Waterfront" and he and Belichick will only say how it's a tough break, but they're looking forward to seeing how the boys respond the rest of the year. That's how a champion deals with adversity. Apparently Young's Wonderlic score got it right.
Posted by RIO at Thursday, September 11, 2008

Typical you know what!!!!