Game 7 is in the books

Game 7 versus the Canadians. Its win or go home time.
This is how the day of drinking started out: 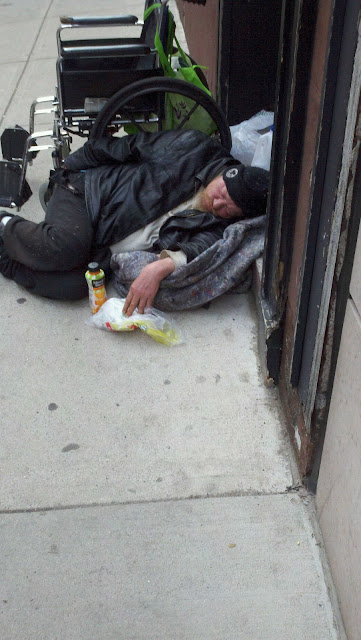 This guy was parked outside of Mcganns and told MikeyT that he didn't need any money. I mean some money could of at least got him a hotel room but with the Subway and orange juice at least he is fed! 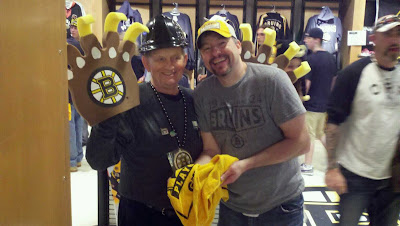 I am sad to say that the Mcganns experience is dead, even though they have grown up happy meals from 11am to 3pm everyday, a burger, fries and a 16oz draft for $5.95. The place started out like a house of fire but in the end it fizzled out and was just a hot sweaty bar that had MIX 104.1 giving out stupid shit.Go suck on that one! 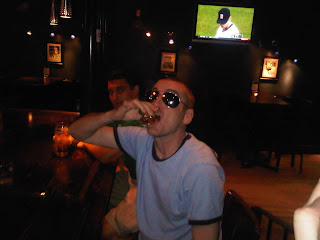 The crew rolling to the game is Big Bob w his 1992 Timex indiglo childs watch, Mario, Supah P, MikeyT, Brian Folan and myself. We were pulling out all the stops.  Making sure we were into the game before the puck drops, finding Jimmy,  MikeyT whoring himself out to all the fanphoto guys and gals plus making sure we secured as many towels as we could.

The crowd was into it. The place was rocking and every one was on the edge of their seats. We would not be disappointed, as the Bruins quickly built a 2-0 lead in the opening 5 minutes. Weren't we here last year game 7 versus the Flyers? Oh yeah we were and FUCKING CHRISSY JINXED THEM!! And as if on Que I get this text from Chrissy after the 2nd goal "It's all over, bring on philly!! Deegan u suck!" Lets just say it was not well received especially when Montreal scored on a power play, 2-1.

In between periods we meet up at the Hub bar but there is no Supah P or Folan. No big deal probably got caught up in a line(not that kind of line people) or something. They may not of met up but this guy did: 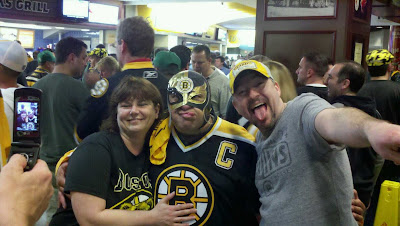 The second period was just as intense as the 1st with the Canadians getting a short handed goal to tie it all up at 2. This game had tons of action, lots of hitting, and plenty of diving from the Canadians.

Back to the Hub bar and still no Supah P or Folan but we did get a prime table. We took some fanfotos(But they were not up at the time of this posting) and went back for 20 more minutes of action.

If we were going to win and move on, I felt like it had to be in the 3rd. The was a  feeling of anxiety running throughout the Garden. It was like everyone was on their edge of their seats waiting for Montreal to score a back breaking 3rd goal and pull out in front. After battling for 15 minutes Chris "The Garbageman" Kelly put the B's ahead 3-2. The place went bonkers. Cats hugging dogs, lesbians kissing straight men, black was now white and hell froze over. Just over 4 minutes to go and all we have to do is hold on. We can move on to Philly! Somewhere in the back of our heads we all knew it was too good to be true. They hadn't had a power play in a whi....ooops spoke to soon. Power Play and GOAL for PK FUCKING SUBBAN! ONE MINUTE AND FIFTY THREE SECONDS IS ALL WE NEEDED TO MOVE ON! UGGGHHHH. The air just got sucked out of the building. That creeping inevitability washing over the 17,565 in attendance. We just played one of the best games ever and we may fucking lose. Sudden death overtime, where one goal ends a season and one goal propels someone to be a hero for the city. What will it be Bruins? Feast or famine? Win or go home? 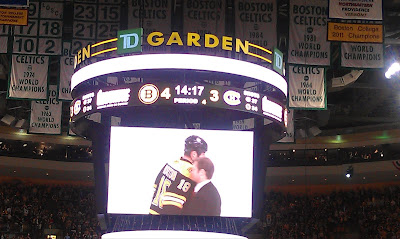 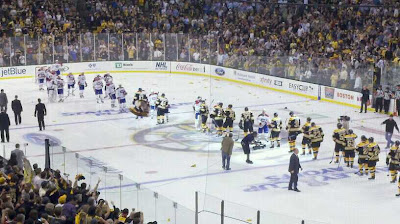 We are heading to Philadephia bitches. I am not a fan of the whole revenge angle. I am not going to say we owe these guys from last year. What happened last year was just that LAST YEAR. What I do know is someone needs to tell Lucic to get his head out of his own ass and for the next 2 days they should practice nothing but getting traffic in front of the net. Also can the kid get to suit up for a game or two? He can do everything that I have seen Soupy and Thornton do.

P.S. the reason Supah P and Folan were no shows?? Dudes were upstairs getting free beers - YES FREE BEERS!!
Posted by d at Thursday, April 28, 2011