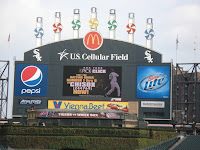 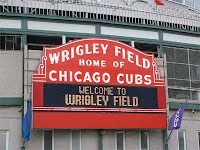 The number 2 baseball park(s) is Chicago's Wrigley Field/ U.S. Cellular Field! That's right people two parks in one swoop! Not alot of time was spent at Cellular field due to it not being in the best  neighborhood and the locals telling us to get in and out- so we did!! This trip included special guest Mikey Layden. The big guy only made two trips with the crew and ironically they were the top two parks! Kid went out in style!! I had heard alot of good things about Chicago so I was excited and we had a new guy doing the hotels Mr. Christian Macphail. I'm not good at finding places or cruising this new www's thing that everyone's into so I was sure Chrissy would handle this no problem! Man oh man!! 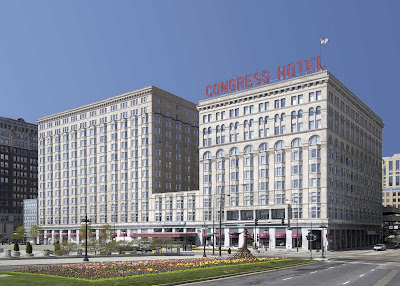 When someone says what did you just go online and randomly pick a hotel its a bad sign!! The place we stayed at looked like it was 1000 years old and the scene of a Alfred Hitchcock murder movie!! It was something!! Huge old place and we had a room upstairs that was connected and I'm pretty sure was for the staff because we were by ourselves on that floor and only saw maids and such walking the halls!! There was also a view of a back alley and what looked like a bloodstain in the closet which added to the ambience  It was however close to Navy Pier which was nice. We also separated into rooms which led to  an old school wrestling match which started by me giving Mr. Layden a jimmy superfly snuka as the giant bear slept!! NOT A WISE MANEUVER and I don't recommend it. 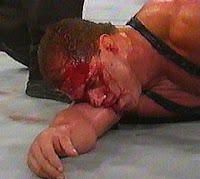 The giant grizzly was taking a power nap and Chrissy put me up to it. I leapt , bounced off his mammoth self and luckily landed in full sprint and was able to flee!! The brawl started and  before we knew it D had hit Chrissy on the head with a lamp which left a RIc Flair like laceration on his scalp. Blood usually ends wrastling matches I found out and the trip was in full swing! On to the baseball parks!! 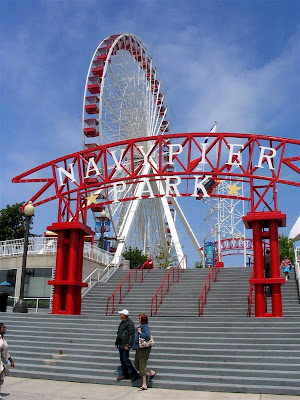 The day we went to Cellular Field it was hot but they are equipped with mist showers, most in the crew find its best to beat a hot day with cold beers or frozen margaritas (in a Ghostbusters like backpack) that they come to the seats with!! I got seats in rf, the white sox where playing the Mariners and one members of the crew suggested sitting there so we could see the  Ichiro fans ( and you know who they are!). Genius idea though they weren't out in force in Chicago on this day! This was also the day there was a cheerleading competition in the bleachers and I realized Chrissy really loves the young talent as he was scouting a few and asking for the legal age laws! The park itself is relatively new and a step below  Camden Yards but very spacious and all the seats have great views. The fact that we were in and out seemed to dim the trip to Cellular but as always safety first and the world would be less of a place if one of the crew got shot in the Southside of Chicago! Plus we still had Wrigley to go to so it was a business trip to the Southside!!
The partying in Chicago never seemed to stop, everytime a bar closed the locals led us to another one that stayed open later it was amazing! I also witnessed Chrissy eat some hot dog with hot sauce so hot he almost was crying I'm pretty sure he would say it was some of the hottest he's had. Another note on hot dogs don't try and order one with ketchup in Chicago- only kids get ketchup on a hot dog! We also made the mandatory trip to a gentlemen's club for review purposes ( huh, Derek didn't have a blog and we didn't do reviews? anyway). It was a decent cab ride to the club and we didn't go at peak hours but that didn't stop the manager from trying to get us to go in the champagne room. "all the players go there, Edgar Martinez, Brett Boone.....they were there last night" sorry bud not working with this crowd! I don't recommend playing this game BUT someone thought it would be cool to steal cab drivers id medallions on the trip, our room had a ton of them sorry Chicago. The people and bartenders in Chicago are a friendly cool group.  We went to a bar called Sluggers while we were there and the bartender not only hooked us up with free shots also promised us "funner outfits" when we came back. Like everywhere EXCEPT BOSTON there are drink specials and happy hours all over and like good baseball trip veterans we find them. Sadly on this day we ran into one that may have been the toughest of all the SAMMY SOSA! I'm not 100 percent sure what this thing had in it but I know one of the ingredients was gasoline! It was loaded and disgusting kudos to D for taking a couple down!!
The much anticipated Wrigley Field experience was for me sort of a letdown. First of all we decided I'd get tickets in the fabled bleachers with the ivey walls! No worries I got them and we headed in. Well, when we get in we don't see the section that are on the tickets? Now we had all been to parks before so we are standing there searching and no one wants to ask where the section is? Then we see the seats in the bleachers are well METAL BLEACHER SEATS!  Finally, Chrissy asks an usher as we are off to the side, I see the usher just shaking his head and Chrissy nodding and I'm like wtf? Well people its general admission first come first serve in the bleachers!!! OUCH. We head to take over our portion of the bench which wasn't as close as we would have like but the view was nice and we settled in. We had some pre-game beers ( some= alot) and I headed off to use the restroom during the Cubbies at bat knowing the line would be short. Wrigley is an old old small place and when I got to the restroom I didn't exactly expect modern amenities BUT I also didn't expect a giant troth!! It runs the length of the wall . 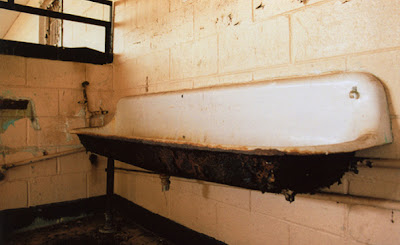 Guys side by side just pissing. It took a little getting used to and believe me when I tell you strangers hitting your foot while you go is not very comfortable and keeps that line moving! I get the nostalgia and I'm big into that but Wrigley is very outdated and Cellular was a much better park that being said the nightlife around in Wrigley Ville makes this place one of the best places we've been to. I'd go back tomorrow if we got seats on the roof across the street that I hear is a great time too. I am quite certain someone was close to moving there and falling in love on this trip! Even with the haunted hotel this trip was a huge success with tons of laughs, a little bloodshed, some tears when we said goodbye but all in all it easily fits into the number 2 spot and is the reason why you take baseball trips!! Up next number one ballpark visited SO FAR- San Francisco
Posted by d at Tuesday, April 12, 2011