We are still in First place and last night we played against the 3rd place team from The Connection who are 11 points behind us. We currently hold a 4 point lead on the #2 team but they have a game in hand. Things will shake themselves out when we have our bye week and unless we really step it up we should be looking at finishing in second in the division. I guess the threat last week did not work because we were Jeffery-less...again! Do not think you will be swooping back in come playoff time. You have to earn you spot on the post-season roster. 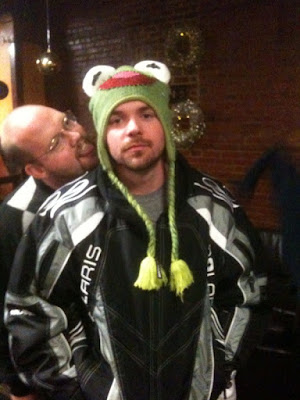 As additional motivation for you to show up, I leave you with this; there were a few conversations about thinning hair and surprisingly they were more about your head than mine. Be a man and start helping Jeb and me defend the follicly challenged people against these abnormally hairy apes. 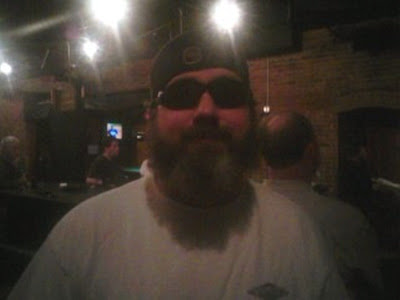 Mike T. made the show and split his time between the Sox, Keno and the matches doing his best to fire up the DTF'ers. Reports are he was headed to Mass Eye & Ear this AM to have his ears assessed. Brighty had some sort of equipment failure leaving us all partially deaf. While the Sox were securing the worst record in the majors Mike was making his bid for Fan of the Year with a line like, "Zayres is closed, Bradlees is closed and now the 17's are closed. That's what we do!" This is the kind of energy level we need to take it to the next level in the playoffs. 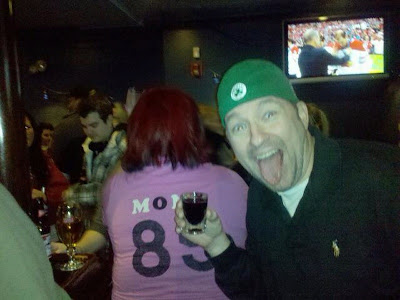 Shawn Larry & Supa P came out of the gates on fire could not close the deal.

Jeb & Derek were also dealing early. DW hit a 73 and shortly after Jeb threw a 125 to grab a big lead. When Jeb followed with a 5 in the next throw, I had a feeling they were in trouble. The other team came back strong and stole it.

Mark & I were up next trying to avoid the sweep. MW jumped on with a 36 and followed it up with a Ton. I played solid enough to help grab the first win of the match.

Shawn & Brighty started the cricket action and got involved in an obnoxious 400+ point fest that the other team started. SL came to life in a big way hitting 4 triples to keep them in the game. Bright finally made a run at the corks and hit a single / double cork to end it.

Jeb & I were up next. Once again Jeb got us going with some great darts and I stepped up in the end and hit the corks. It was a good team effort.

P & MW had the 3rd match and lost in a close one. They were there until the end and the other team hit 5 corks to take it away.

Derek: Game 1 the captain could not get on and found himself in a 200+ hole. The other guy struggled to hit his out and D wasted no time for a great win. Game 2 Derek jumped right in and was up 295 points. He took about 100 shots at the double 3 and appeared to be toying with his opponent. As soon as the other guy was on an out, Whitley made the shot to win. As predicted by yours truly, not only did he win the match, but he did it in just 2 games. I am going further out on the limb by saying this is the kid to watch come playoff time!

Jeb: He could not hit the on dart in the first game and let the other guy run it down. By the time he was able to get on he was down 250 points. He battled back to an even game but lost to the Double 2. Game 2 was similar to game 1. It was a struggle to get on and quickly fell down 150 points. Jeb managed to put up some good numbers to make it a close one but fell short in the end.

Welchie: Game 1 was close from start to finish. It was looking like a win for Mark until the other guy hit a nice 3 dart out from 54 to take it. Game 2 same as game 1. Neck and neck from start to finish but this time it was Mark hitting the double to win. In game 3, Mark hit the double 18 to jump on and took an early 125 point lead. It was tied at the half way point and tied again with 34 to go. After a bunch of wired misses from both players, Mark hit the double 4 for the victory. Good Win.

Brighty VS Big Mouth: After the ridiculous cricket game between these two this was the marquis match-up. In game 1 TB got up early and faded late. With no wiggle room he lost. Game 2 was the opposite of the first game. He was down early but made a good push late. Bright was able to take down the double 19 for the win. Game 3 was a good game all the way but the loudmouth hit a few tons to beat the DJ.

Me: In the last match of the night I played like garbage. The first game was close one and I snuck out a win. The 2nd I came back from 240 points down just could not find the out dart. Game 3 was just like game 2. Could not get on, made a good comeback, could not hit the dart when it counted.

There was 1 victim in this strange night. The couch below never had a chance against Derek. 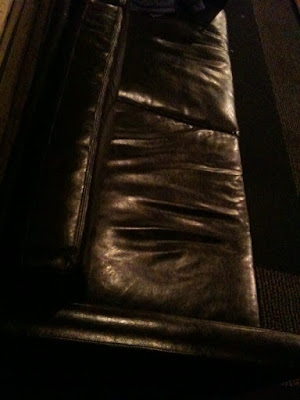 Speaking of Derek, I got a tour of the Whitley Compound last night. After hearing Supa P paid $117.00 to fill his tank I could not let him unnecessarily burn any fuel so I made the trip to Adams Shore. I was not allowed to get a look at the inside, but I'm sure it is nice. Anyone that lives in a neighborhood that has it's own private beach must be doing something right. Too bad it was raining as I thought about doffing the clothes and going for a dip.

'Til next time Bitches,