Week 10 brought us back to Jamaica Plain to play against the team who is chasing us for first place. According to the latest standings we have a 2 point lead on them but there is some confusion because of a team dropping out of the league. Either way we are in great shape in our quest to make the playoffs with just a few weeks left in the regular season. If you have not attended a match you are missing some fun times. Lots of boozing, lots of ball breaking, some good (and not so good) music & of course a few dart games mixed in to the night.


501's = 3 wins 0 Losses
Capt'n Derek and I started off the night with a nice win to set the tone. I doubled on right off the bat and DW kept most of the darts on the board to help to pound it down. I closed it out with a double 16.

Jeb & Supa P kept the momentum going with a comeback win. The boys got off to a slow start and had a few hiccups in the middle but they stepped up in the end. With 160 to go P tossed a ton and Jeb followed with a 1, triple 19, double 1 (sometimes elusive). Not the ideal out from 60 but it was great to see him stay with it and a win is a win.

Mark & Shawn Larry played a close one for 3/4's of a game and then just ran away with it. SL threw a 97 to get it down and MW hit the (most times elusive) double 1 for the win.

Cricket = 2 Wins 1 Loss
Brighty & Shawn got involved in a point fest seesaw battle and they both played well. Shawn Larry sealed it with the final cork.

Jeb and I lost in a close one. We were looking good from 20's to 15's but stalled out on the cork. Our opponent hit 7 corks in 9 darts and we just could not hit any.

P & Welchie played a solid game. They ponited when they had to, and closed the numbers when it made sense. It was a good back and forth battle and MW shut it down with a double cork.

301 = 2 Wins 4 Losses
DW lost in a 2 game match. He kept it close but the other guy wasted no time in getting out in both games. Each week he is showing improvement and is flat out funny to watch when he gets pissed off. I'm predicting a win in singles for him next week.

Jeb lost in a 3 game match. Game 1 he came back from 200+ down but fell short. Game 2 he came out hot and faded in the end but was just good enough to close with a nice 10, double 4. Game 3 was neck and neck but not meant to be.

MW lost in a 3 game match. The 1st game I blame on Pat Bennetar's hit me with your best shot. One of the worst songs in history. No one can expect to shoot well with that shit on. He won game 2 with a nice 3 dart scramble from 30 hitting 15, 7 & double 4. Game 3 came down to a battle of the double 1's. (always elusive)

Bright stopped the slide taking his match in 2 games. In game one he jumped on it early and then almost let the other guy back in. He hit a great 16, double 4 to win. Despite my bad math in game 2 he was able to hit the correct out (twice) and bring home the win.

I was the anchor man as usual and had the pressure of a winning night or a tie. Game 1 was an easy win. I had a good lead on him in the 2nd game but just could not hit my out. The 3rd game was a barnburner. We both had our chances and I played away from the double 9 and smashed a 10 double 4 for the win.

Now to the BS commentary:

It was nice to see Jeffrey and Mike T. in the house...NOT!!! For Christ sake even Brownie, Sassi, Chuck T. and Leslie made the Tuesday night drinking session. I'm surprised KB did not hop a flight up North to get involved. Get ready Sarah it might be time to start another letter writing campaign. 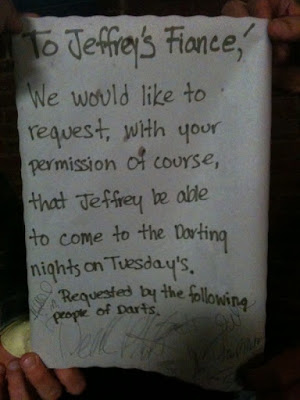 Other than Siouxsie and The Banshies and Pat "Bent Guitar" the music was pretty good for a bar in Jamaica Plain mostly because we feed the jukebox for most of the night. Good mix of west coast rap, early 80's and late 90's rock and of course the Mickey Avalon unofficial DTF'ers theme song.

Unlike the last time we were here we had no snow, no puke in the bathrooms, no dropped broken beers and fewer freak shows. Overall, I guess it was a better night...
As some of you may know I write this stuff as the night is happening. Just after I hit the send button, I find out Supa P puked, and then Jeb broke a beer..So I guess the lack of snow and freaks made it tolerable. Unless we have a playoff match against this team, I am pretty sure I will never step foor in that bar again. The beers are so God damn expensive that they killed our suck money and a few of us had to dip into our pockets to keep our drink on. I have never been a fan of teams with matching dart uniforms or teams that brag before the match that they have not lost all season. Well I guess you can't say that anymore! While outside enjoying some I observed how they roll. Very impressive bikes, CLOWNS! 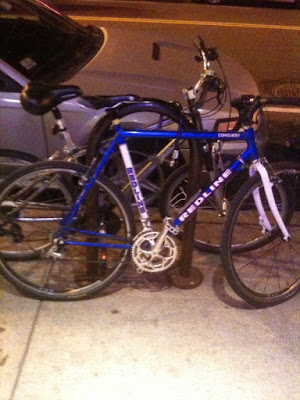 just awesome! can i offer a suggestion? can we get the nightly mvp in there? people wanna know!