season in the books and the ADSL has a third winner in three years. A team went from 10th place to 1st place and another team went from 1st place to 10th place. What the hell is going on? No consistency from anyone really, it tells me that fantasy football is nothing but luck. It doesn’t matter if you study every player (deadbeat) or can’t even read (Dawgs) your chances of winning are about the same because there’s no way of telling what these players are going to do any given Sunday. How else can you explain L.T., A.P. & T.O. (picks 1, 4 and 11 in this year’s draft) losing to guys with nicknames like Fitzy and Kurt (is that short for Kurtis?). One fucking guy with a nickname (ocho cinco legally changed his name so it’s not a nickname anymore), I had Megatron, Gonzo and Too Soon along with my alphabet soup guys and they don’t even call his Thomas Jones, T.J. and he still wins. Anyway, back to my point, in the three years that this league has been going on, there’s only been one consistent player (consistently good JSL), VOODOOMAN, Fuckin’ SKZA, Street Pharmacist, call him what you want. You don’t hear a word from him, take a hint Costanza, but he’s always right there at the end.

A few thoughts on the season that was

I am happy that we will get a two for one with the dress wearing this year and hope nobody uses the name Defending Champs next year or ever again.

Just as glad we won’t have to see Smidawg in a dress. It goes to show if you hope and pray enough, Steven Jackson will reward you. Isn’t that what first round picks are supposed to do?

I thought JSL was going to run away with the title after winning back to back weeks in weeks 5 & 6, what happened? Too many side bets, lost sight of the big picture.

MFN did a great job being the Commish, as usual; your WRs shot you in the foot literally in a one case. You should have traded Jacobs for Jennings when you had the chance.

Dirtballs too many injuries early in the season to compete, coulda been a contender with any luck at all.

Nacho was a QB away from finishing in the money, still spent like the Yankees even after he was eliminated, you have like that.

Wizards very impressive 4th place finish without winning a week, still don’t pay the rent though, my only prediction: next year is your year to finish in the money.

Street Pharmacist got screwed by Marion Barber and the week 17 Colts, should be the champ. 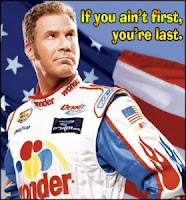 SFLABO, I put together what I thought was the best team possible but still couldn’t get the job done. In the immortal words of Ricky Bobby, “if you ain’t first, you’re last.” But at least not wear the dress last. Remember, if Ricky Bobby were commissioner, only one team wouldn’t be wearing a dress, that’s a scary thought.

Finally, Deadbeatdad what can I say that you haven’t already said over and over again. Congrats and I’m glad the Philly Defense put you over the top, has to make one of us feel good.

See you next season.
Posted by Iggles at Tuesday, December 30, 2008

I smel what this man's cookin !