At season’s end, we sat down at Madd Fucking Niggerish head quarters, aka The Barber Shoppe, and we reviewed our pre-draft rules/plan/manifesto/goals. After a few 40’s and a couple of blunts we can see where our season fell to shit. Damn it hold on…….Sorry about that, fucking Brandon Jacobs always playing that new 50 Cent joint - Get Up! Now back to my point: WE DIDN’T FOLLOW OUR PLAN!! Now I know what you are saying – You actually have a plan every year? It is more like a guideline or rules that I have adapted to keep me from wearing a dress every year. Some rules are dumb. Some rules are stupid. But without rules we would have anarchy or a team that looks a whole lot like the Defending Champs.

Here are MFN’s Fantasy guidelines/rules:
Try to get at least 1 top 5 guy at every position
Drink early and often
Rank the top rookies – sometimes reach for them when drafting (this is like stealing & we like stealing at MFN)
Never ever pick the same guy from the year before…
Unless that man is MB3 or Chris Chambers
Never drink St Ides 40’s
Always take a riskier pick for a back up QB
Never draft a defense or kicker before round 13
Always buy Zig-zags and White Owl Blunts…NEVER EZ-Widers or Philly Blunts
Try not to sit near Smiddy at the draft

I mean we don’t even have to get past the 1st rule to see where the problems started. I remember being bombed for the weeks leading up to the draft but everyone was talking about “its no longer rb-rb league”, “take the best available”, “take wr–wr if you have to”, “don’t be afraid to reach for a QB”. It was “Old School” vs “New School”. I had been “New School” for so long that I got caught up in the hype. So I flipped it on them and I went “Old School” with my Clinton Portis and Marshawn Lynch picks.

This strategy served me well through 11 weeks - I was in 3rd place, in the money and happy as the SmidDawgs at a Lane Bryant Fashion show! Then we started down a slippery (NOT WIZARDS) slope. The whole team fell apart – Chris Chambers hurt not producing, MY MANCRUSH IS OFFICIALLY OVER WITH HIM; Jim Zorn decided he had a quarterback, HE DIDN’T; Tom Coughlin Decided he had better options than Jacobs, HE STILL DOESN’T; Plaxico Burress decided he is Gangsta, UHM NOPE; Chris Cooley believed his own hype, CAPTAIN CHAOS = MAJOR BUST; Philip Rivers decides to play later in the season, SUCK IT NORV; and basically the rest of MFN sucked after week 11, BAD COACHING/MANAGING/TEAM CHEMISTRY. We fell apart faster than the T.O. – ROMO – COMBOYS love affair.
As I said to the SmidDawgs in week 14, “I don’t care who finishes in last as long as it isn’t MFN”. I didn’t finish in beer bitch or in a dress and I came away with some new rules for my list. Overall a successful season.

As far as the rest of the league (some quick hits): 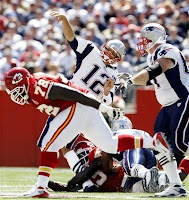 Dead beat dad risky draft with Fitzy and Warner but it worked out for you in the end. Brady’s leg injury was probably your saving grace. Don’t get me started on D’angelo Williams.
Sflabo is always wheeling and dealing. His war room door is open 24/7 365. Great moves and another outstanding draft.
Street Pharmacist I don’t know how you do it but every year you finish in the $$. I don’t know if it is your product but if so maybe I could get some?
Slippery Wizards as soon as you went to the Wizard Tree things started to turn around and you just kept climbing. Probably best at working the waiver wire.
Nacho Papa as always there is no budget with this team – Their Motto is “Spend Spend Spend” – very quiet this year, though.
D-Street Dirtballs started out flat with injuries and turned it on late in the year. Always falling just short of winning a week…way to go Dirtballs! P.s. maybe you mancrushs on Mcnabb and Westbrook will stop now that they fucked you with no Vaseline (I mean it’s not as bad as my mancrush on Chris Chambers but it is close)
MFN “FUCK YOU D’ANGELO WILLIAMS AND JONATHAN STEWART”, you 2 are no SMASH AND DASH – sorry I have had wayyyy tooo many 40’s.
JSL you started off hotter than a hooker with gonorrhea and just like Smiddy on a 1st date you blew your load way too early and way too often. Better luck next year.
SmidDawgs if you put in HALF as much of your energy into actually drafting your team as you do for rooting for them not to fail – you probably wouldn’t of been in the dress battle all year.
Defending Champs you were awfully quiet all year long. Not one hater remark in 17 weeks. Not your normal M.O.; I hope your comments start up again next year. It was a fun long race.

I know we had the Iggles weekly reviews and his Costanza awards this year but it wasn’t the same on the actual ADSL message board. There was not enough ball busting in an open forum. I missed that this year. I hope we can insult each other a little bit more next year. I mean isn’t that one major component of fantasy football? Lets end 08 off right – SUCK IT DEAD BEAT DAD! There is only 8 more months till the draft but who is counting?

Sorry I gotta run Cadillac Williams is attempting to have a race with Tedd Ginn Jr, I told them to stop stealing my BLUNTS!
Posted by Iggles at Wednesday, December 31, 2008

Great job!!! That why you run the show and we follow.