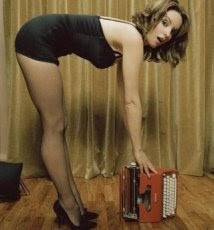 Origins Of The Cougar
October 21, 2008 - 5:30 pm, By COED Staff
A little trivia for you: The origins of the term “cougar” dates back to the 1980’s when members of the Vancouver Canucks used it in the locker room as a derogatory name for the team’s older groupies. But the concept has been around much longer.

Hot, tight-bodied older women have always fueled younger men’s sexual fantasies since our fathers were our age. (Just watch 1967’s The Graduate to see Dustin Hoffman seduced by pop-culture’s first cougar.) But now that every “The View”-watching wildcat is lusting after boy-toy ass, a new breed of sexed-up older ladies is upon us - and no man is safe.

From Mrs. Robinson to Sharon Stone, DETAILS takes a look at the social evolution of the cougar in this month’s Saturation Point: Cougars.
Posted by RIO at Friday, December 05, 2008

What the world needs is Hot Cougar on Cougar action!